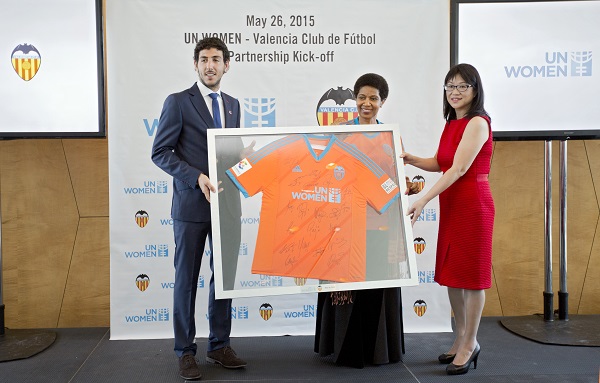 Central Midfielder of Valencia FC Daniel Parejo, Under-Secretary-General and UN Women Executive Director Phumzile Mlambo-Ngcuka and Chairwoman of Valencia CF Lay Hoon Chan Photo: Lázaro dela Peña
New York – Today at UN Headquarters, Valencia Club de Fútbol (CF) and UN Women are to announce their partnership in support of UN Women's mandate to promote and support gender equality across the globe. For the first time ever, UN Women will collaborate with a professional sports team. The organization's logo will be featured on the back of the Valencia CF players' jerseys when they play in European competitions such as the Champions League, one of the most prestigious tournaments in the world and the most prestigious club competition in European football. Valencia CF clinched a Champions League qualification just three days earlier. In addition, as part of the partnership, special matches and soccer clinics will take place over the next four years throughout Spain, the Americas and other parts of the world.
Launching the partnership, Under-Secretary-General and UN Women Executive Director Phumzile Mlambo-Ngcuka says: "UN Women is dedicated to bringing more men and boys into the gender equality conversation. Valencia's players are strong role models who will lead by example and inspire their vast fan base. We are excited to have Valencia show its support during every match played, with the cause prominently displayed to fans and viewers around the world."
With high-profile public advocacy initiatives such as HeforShe, UN Women seeks to engage men and boys across the globe as agents of change.
Chairwoman of Valencia CF, Lay Hoon Chan, the first woman ever to hold this role in the club's 96-year history, and the only female Chair of a club in the top Spanish league (Liga BBVA), adds: "We are honoured to work alongside UN Women and the global community to support and bring awareness to such a remarkable cause. This is a long-term commitment to really help make a difference to expand advocacy efforts towards gender equality. It's not only a women's issue, it's a human rights issue that Valencia CF strongly believes in."
The entire Valencia CF first team, including superstars Dani Parejo, Shkodran Mustafi, Paco Alcacer and Alvaro Negredo, as well Valencia CF Executive President, Amadeo Salvo, and Valencia CF Ambassador Mario Alberto Kempes are to kick-off the partnership in New York. David Villa, the current superstar of Major League Soccer (MLS) New York City FC and former Valencia player, and the President of La Liga, Javier Tebas, are invited as special guests.
Valencia CF will introduce their new jerseys when the team travels to Columbus, Ohio to play the MLS team Columbus Crew on 27 May, 2015.  As one of the biggest and most successful clubs in Spain and throughout Europe, Valencia CF's role as a UN Women partner will bring awareness of the shared commitment to gender equality to new audiences.
Follow the conversation on Twitter via #unwomenvalenciacf, @UN_Women and @valenciacf.
Photos will be available here shortly after the launch event »
Related News
08/08/2022
UN Women joins with FinDev Canada, Portland Private Equity and CARAIA to equip regional Fund Managers with knowledge of gender-smart investing
13/06/2022
Private Sector benefits from EU-UN Spotlight Initiative Workshop to end VAW in workplaces and communities
10/03/2022
Bermuda Stock Exchange ‘Rings the bell for gender equality’ on International Women's Day 2022
13/07/2021
Rebuilding Jamaica's Economy with a Gender Lens
13/07/2021
Press release: UN Women presents ‘A Force for Change’, an art exhibition and auction featuring work by 26 Black women artists, benefitting Black women
END_OF_DOCUMENT_TOKEN_TO_BE_REPLACED