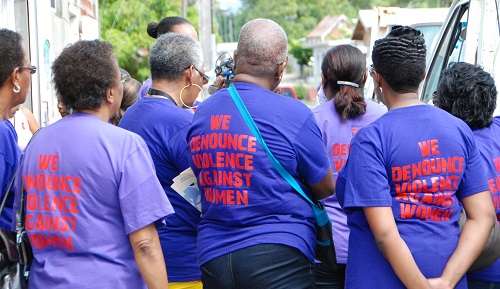 While traditional gendered roles inform male vulnerability to involvement in violence and organized crime, women and girls are made vulnerable to physical and sexual abuse. Citizen Security concerns are therefore manifest differently for men and boys and women and girls.

Gender Based Violence (GBV) can also be defined as: Acts of physical, mental or social abuse (including sexual violence) that is attempted or threatened, with some type of force (such as violence, threats, coercion, manipulation, deception, cultural expectations, weapons or economic circumstances) and is directed against a person because of his or her gender roles and expectations in a society or culture [1].

UN Women MCO – Caribbean has supported the development of national action plans to address GBV in five countries (Antigua and Barbuda, Belize, Grenada, Jamaica and St. Kitts and Nevis) and the revision to domestic violence laws in three countries over the last five years (“State Accountability” framework), and the revisions/adoption of legislation and protocols to respond to GBV; supported regional policing institutions to build capacities to tackle GBV and end impunity; pioneered an accountability, court-based programme for perpetrators of domestic violence (“Partnership for Peace” tools); supported the creation of a network of men advocates as partners for gender equality (CariMAN); and developed a host of multi-media advocacy approaches in support of the UNiTE Campaign.

With a view to further supporting implementation of the National Plans of Action on GBV, the UN Women 2014-2017 programming is target primary prevention initiatives that are systematically implemented by national and community partners. These initiatives will be aimed at addressing behaviours shaped by gender norms which support definitions of masculinity and which sanction the use of aggressive and violent behaviour by men and which undermine the agency and self-determination of women. In Jamaica, UN Women will lead the development and coordination of the Joint Programme in Jamaica on eradicating Gender-Based Violence through the implementation of the National Strategic Action Plan to Eliminate Gender-Based Violence, with equal focus on establishing protocols, data management and required capacities to implement policies and legislation; and strong focus on primary prevention, targeting both inner-city neighbourhoods and parish communities.

Building on the on-going Memorandum of Understanding (MOU) with CARICOM and in partnership UNDP Sub-regional Office for Barbados and the OECS, UN Women is supporting the development of a Caribbean model of Prevalence Surveys on Gender-Based Violence based on a global methodology development by the World Health Organisation (WHO).   Two consultants (international and regional) were engaged to develop the model.  The survey assesses the prevalence of gender-based violence in intimate partner settings, and is primarily focused on the most prevalence form of gender-based violence, that of violence against women and girls. The scope looks at all forms of violence facing women and girls. A first step in this regards was the convening in April 2014 of a Regional Expert Group Meeting of representatives from National Statistical Offices (NSOs), Ministries responsible for gender equality, specialised violence intervention units of national police forces, non-governmental organisations providing services to those who experience GBV, as well as representatives from international and regional organisations.

Building on initial support given by UN Women to develop National Action plans to address Gender Based Violence, the Governments of Belize, Grenada and Antigua and Barbuda have been recipients of grants from the UN Trust Fund to End Violence against Women to support implementation of these NAPs; and recently the NGO Jamaica AIDS Support for Life (JASL) project to strengthen the implementation of laws, policies and action plans for “Expanding Gains to Decrease and Prevent Violence against Women in the Context of HIV and AIDS”.