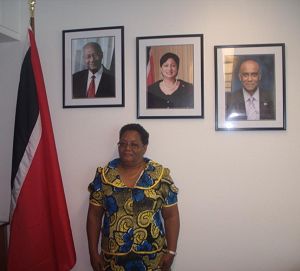 Ida Le Blanc at the Embassy of Trinidad and Tobago in Geneva, where she met with the Minister of Labour and other members of the National Delegation to the International Labour Conference in June 2011

The following interview was conducted by UN Women with Ida Le Blanc, General Secretary of the National Union of Domestic Employees of Trinidad and Tobago, with a special acknowledgment to Professor Rhoda Reddock of the University of the West Indies for permission to quote her tribute to Ms Le Blanc’s mother Clotil Walcott.

Ida Le Blanc is the General Secretary of Trinidad and Tobago’s National Union of Domestic Employees (NUDE), representing at least 10,000 domestic workers nationwide who are mostly women according to NUDE.[1] The organization advocates for labour and social protections for domestic workers and also represents others employed in the informal sector like home-based workers and shopkeepers. Le Blanc traces her commitment to empowering women workers to her mother and grandmother. Her mother Clotil Walcott, a celebrated women’s rights activist, co-founded NUDE in 1974 and in 1982 the organization became a registered trade union. After Walcott’s death in 2007, Professor Rhoda Reddock of the University of the West Indies, herself a champion for women in the Caribbean, called her “the best warrior for justice for her class she could be.”[2] Walcott’s own mother was a domestic worker who became a single parent after her husband died when Walcott was six years old.  Le Blanc’s tireless work embodies her mother’s sentiment - “I cannot allow my mother’s struggle to go down the drain.”

On 7-8 September 2011, Le Blanc will represent her organization at a Regional Meeting in Kingston hosted by the Government of Jamaica together with UN Women and the International Organization for Migration (IOM) on “Migrant Domestic Workers at the Interface of Migration and Development: Action to Expand Good Practice.” With a focus on domestic workers in Latin America and Caribbean, the meeting is one of a series of regional events being held for the Global Forum on Migration and Development 2011(GFMD 2011), a government-led process currently chaired by the Government of Switzerland that brings together UN Member States, civil society, international organizations and policy experts to further dialogue and cooperation on international migration and development.

The Latin American and Caribbean region is second only to Asia as the region with the most domestic workers, most of whom are migrant women and girls. While globally women represent 83% of domestic workers, in Latin America and the Caribbean the numbers are even higher –92% of domestic workers in the region are female.[3]  Another meeting on migrant domestic workers will be held in Africa, the region with the world’s third-largest domestic worker population, hosted by the Government of Ghana, with UN Women, the Migration Policy Advocacy Network and the African Diaspora Policy Centre in Accra, Ghana, on 21-22 September 2011. With the GFMD now in its fifth year and with the Swiss Chair placing domestic and care workers squarely on the agenda, Le Blanc firmly believes the Kingston meeting will result in concrete outcomes – “We would like to see a recommendation that addresses the Caribbean Community (CARICOM) regarding domestic workers migrating within the Caribbean. We want to raise awareness of their rights and need for protection in the wake of the International Labour Organization’s (ILO) Convention.”

The ILO Conventionand Recommendationon Decent Work for Domestic Workers, adopted in July 2011, the CEDAW Committee’s General Recommendation No. 26 on Women Migrant Workers(including domestic workers), adopted in November 2008, and the Committee on Migrant Workers’ General Comment No. 1 on Migrant Domestic Workers, adopted in December 2010, represent a framework of protections for domestic workers. Le Blanc states that all key stakeholders must draw on this framework to empower domestic workers to claim their rights and celebrate their contributions to development. “How can the Convention and these other instruments have practical meaning for us? They must be implemented throughout the Caribbean!”

She will be joined in Kingston by a range of stakeholders who will share good practices on protecting domestic workers from Latin America and the Caribbean and even Asia and Africa, including: implementing policies such as labour laws and contracts that recognise domestic work as real work; providing social protection and services and promoting self-organization by domestic workers; ensuring gender-sensitive remittance transfer services; and harnessing savings and investments, including diaspora investments, for sustainable development. These policy dialogues reflect the initiatives taken by Governments and international organizations to support civil society groups like NUDE.

Currently, Le Blanc and her colleagues are collaborating with UN Women and the ILO in to strengthen the capacity of NUDE by developing new strategic and action plans; conducting sensitization and awareness-raising programs to eliminate gender inequality and protect workers’ rights; and organizing members to advocate for decent work. “We are starting a recruitment drive that will continue because we want this project’s outcomes to be sustainable. We have also started training our members on how to address inequality in the workplace… We also meet regularly to assess our progress and how to move forward.” UN Women and the ILO provide resource persons to train NUDE’s leaders and organizers.

Ultimately, Le Blanc believes that platforms like the GFMD, the world’s largest and most comprehensive forum on international migration and development, are helping to bring domestic workers out of the shadows by recognising their urgent need for protection throughout the migration process and in the workplace, and by acknowledging their contributions to development. “We want visibility now…To let people know we are here and how much we are doing…I myself am a grassroots woman and to uplift myself and further my development I seek to uplift other women too.”