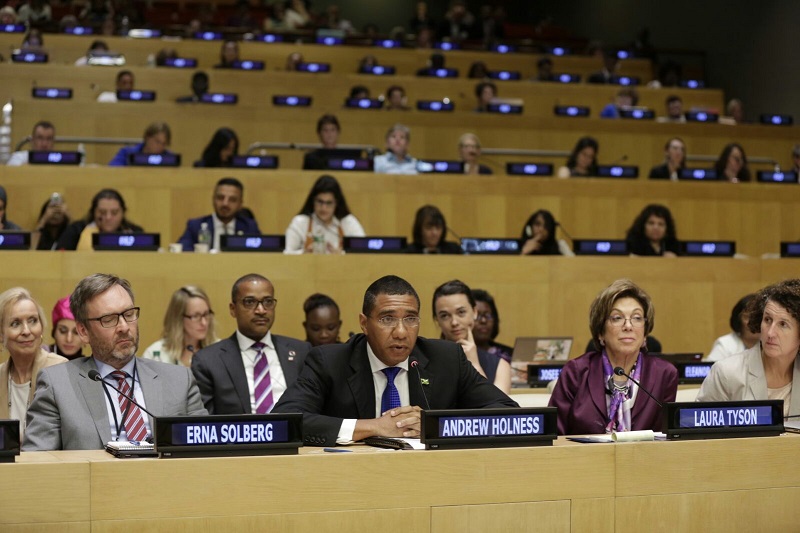 Prime Minister Andrew Holness announces Jamaica’s ratification of the ILO Convention C 189 (also known as Domestic Workers Convention) during his participation in the deliberations on a report by the United Nations High Level Panel on Economic Empowerment of Women at UN Headquarters in New York on Thursday, September 22.Photo compliments the Office of the Prime Minister

Kingston, Jamaica: Prime Minister Andrew Holness has announced that the government, due to its commitment to empower women economically has signed the instrument of ratification of ILO Convention C 189 (also known as the Domestic Workers Convention) according to an official statement from the Office of the Prime Minister.

Prime Minister Holness who was participating in the deliberations on a report by the United Nations High Level Panel on Economic Empowerment of Women at UN Headquarters in New York said, “We are committed to the protection of rights of the most vulnerable among us and to ensure the welfare of domestic workers within the framework of our determination to promote a decent work for all.”

A decent work for all and empowerment of women are part of the Sustainable Development Goals (SDGs).

Recognising the presence of Ms Shirley Pryce at the UN, who is a staunch advocate for women’s empowerment and the rights of domestic workers in Jamaica, Prime Minister Holness stated that “I’m pleased to announce that Jamaica has signed by virtue of her (Ms Pryce) instrumentality, we have signed and we are ratifying the ILO Domestic Workers Convention C189.” He added that the instrument is now in the process of being deposited at the International Labour Office through Jamaica’s Embassy in Geneva. 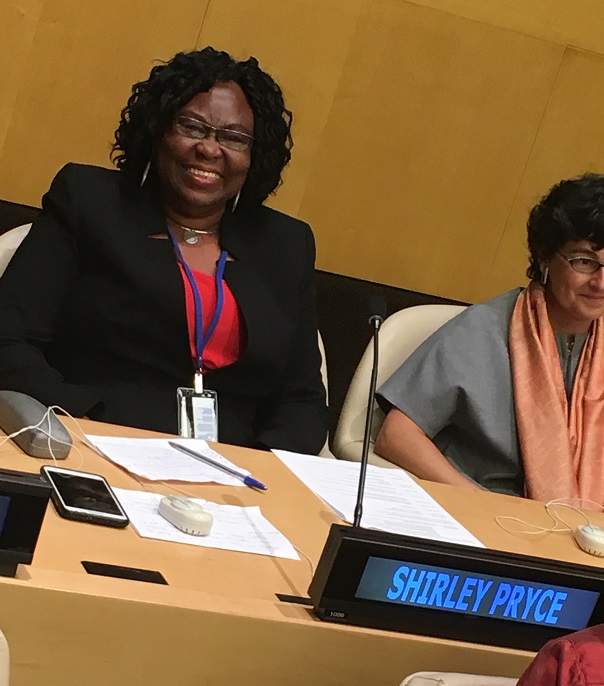 Ms Shirley Pryce (left) a staunch advocate for women’s empowerment and women’s empowerment and the rights of domestic workers in Jamaica is seen at the UN Headquarters on Thursday, September 22 where Prime Minister Andrew Holness announced the ratification of the ILO Convention C 189 (also known as Domestic Workers Convention).Photo compliments the Office of the Prime Minister

UN Women offers its congratulations to the Government of Jamaica and the Most Honourable Prime Minister Holness on the ratification of Convention 189 – Decent Work. The MCO recognises the significant and consistent advocacy of Ms. Shirley Pryce, President of the Jamaica Household Workers Union for the ratification of the convention. UN Women is pleased to have been able to support the JHWU training of household workers in its several chapters across Jamaica to be aware all of their benefits and rights under the term Decent Work and to be able defend their interest and rights where the need arose.

We look forward to the implementation of policies and programmes through the operationalisation of C189 and to the JHWU and the Caribbean Domestic Workers Alliance’s leadership across the Caribbean to see more countries in the region, ratify and implement this important standard and commitment for workers’ rights.

The Prime Minister said he looked forward to the early universalisation of the Convention and encouraged states that have not yet done so to ratify the instrument as soon as possible.
Related News
16/05/2022
Global Affairs Canada, UN Agencies and Government of St Lucia launch BBE Project
10/12/2021
UN Women Multi Country Office - Caribbean partners with Portland Private Equity to take bold steps towards Gender Lens Investment in the Caribbean
19/10/2021
Innovative strategies and partnerships urgently needed to arrest women’s economic slide as a result of COVID-19
01/09/2021
Women Agripreneurs in Jamaica Receive Financing for Business Development
30/08/2021
Jamaican Women Craft Vendors get Business Support to Enhance Resiliency when Disaster Strikes
END_OF_DOCUMENT_TOKEN_TO_BE_REPLACED