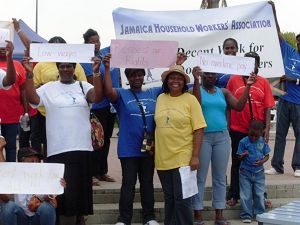 Shirley Pryce is President of the Jamaica Household Workers’ Association (JHWA), and a former domestic worker for over twenty years. She is a founding member of the JHWA since it launched in 1991 with around 20 members – it now has over 1600 members, and also represents practical nurses, security guards and employees working in wholesales. Pryce estimates that there are over 100,000 domestic workers in Jamaica, although official statistics for 2010 showed just around 58,500 households had employees. She says that “domestic work can be regarded as the single largest female occupational category” in the country. Most of the JHWA’s members are women aged 25-65, and many are single mothers without any formal qualifications.  The JHWA collaborates with the Government of Jamaica’s Human Employment and Resource Training Trust (HEART) and the National Training Authority to train domestic workers to improve their proficiency in domestic work and also to gain new skills and to transition into higher-paying professions. Pryce says, “If a young person comes to me and they don’t want to be a domestic worker they can be a chef and work in the food industry instead…at age 20 you don’t want to be stuck in domestic work.”  The JHWA also runs seminars bringing domestic workers and employers together to raise awareness on the rights and responsibilities of both parties.

On 7-8 September 2011 in Kingston, Jamaica, Pryce will represent her organization at a Regional Meeting organized by the Jamaican Government together with UN Women and the International Organization for Migration (IOM) on  “Migrant Domestic Workers at the Interface of Migration and Development: Action to Expand  Good Practice.” Focussing on domestic workers in Latin America and Caribbean, the meeting is one of a series of regional events being held for the Global Forum on Migration and Development 2011(GFMD 2011), a government-led process currently chaired by the Government of Switzerland that brings together UN Member States, civil society, international organizations and policy experts to further dialogue and cooperation on international migration and development.  Another meeting on migrant domestic workers will be held in Africa, hosted by the Government of Ghana, with UN Women, the Migration Policy Advocacy Network and the African Diaspora Policy Centre in Accra, Ghana, on 21-22 September 2011.

She also aims to solidify partnerships with other domestic workers’ organizations across the Latin America and Caribbean region. Pryce envisages from the meeting, which will include civil society representatives like the National Union of Domestic Employees (NUDE) of Trinidad and Tobago, and the Confederation of Domestic Workers Confederation of Domestic Workers from Latin America and the Caribbean (CONLACTRAHO).[1]“I am very happy to attend this meeting…right now the door is open for Caribbean domestic workers to move between the islands for work. This type of meeting is a stepping stone for our organizations. We will forge links. We can build networks and get stronger.”

The Government of Jamaica’s decision to host the meeting is especially significant for Pryce – “This event will educate the nation, it will spread our message that domestic workers must be recognised and respected.” The meeting offers a unique space where civil society organizations can share good practices with Governments, international organizations and policy experts to collectively implement protections for domestic workers.  Pryce is determined to strengthen existing relationships with the Government of Jamaica, UN Women, the ILO and others in attendance. The JHWA already has a close partnership with the Bureau of Women’s Affairs, which supplied the organization with an office and meeting space and provides resource persons who build members’ capacity to claim their rights and empower other women workers. Pryce is on the Minimum Wage Advisory Commission which directly advises the Ministry of Labour and Social Affairs.  She views the opportunity to interact with key decision-makers at the international level via the GFMD, the world’s largest and more comprehensive dialogue on international migration and development, as invaluable. “It’s a learning experience so we can all come away richer and apply the knowledge we have gained in our own countries.”