Bridgetown, December 1 - Set among the tall palms and lush vegetation of Barbados’ South Coast, United Nations House, is illuminated in an orange glow.

In a sunset lighting ceremony, which took place on 25 November, the bold orange light engulfed the three-story building, to shine a spotlight on violence against women and girls. UN House is home to seven UN Agencies, Funds and Programmes covering Barbados and the Eastern Caribbean.

The occasion marked the start of the annual commemoration of the 16 Days of Activism and International Day for the Elimination of Violence Again Women.

Lighting UN House orange is in keeping with the UN Secretary-General’s UNiTE to End Violence against Women campaign to call national and global attention that no longer can we delay taking the necessary actions to eradicate gender-based violence.

In his opening remarks, Resident Coordinator a.i. Aloys Kamuragiye echoed the 2020 message of the UN Secretary-General urging the international community to work to end the shadow pandemic of gender-based violence once and for all.

“Violence against women and girls is a global human rights challenge.  The COVID-19 pandemic has further exposed this issue as a global emergency requiring urgent action at all levels, in all spaces and by all people.”

This year’s 16 Days theme "Orange the World: Fund, Respond, Prevent, Collect!" calls for global action to bridge funding gaps, ensure essential services for survivors of violence during the COVID-19 crisis, focus on prevention, and collection of data that can improve life-saving services for women and girls. 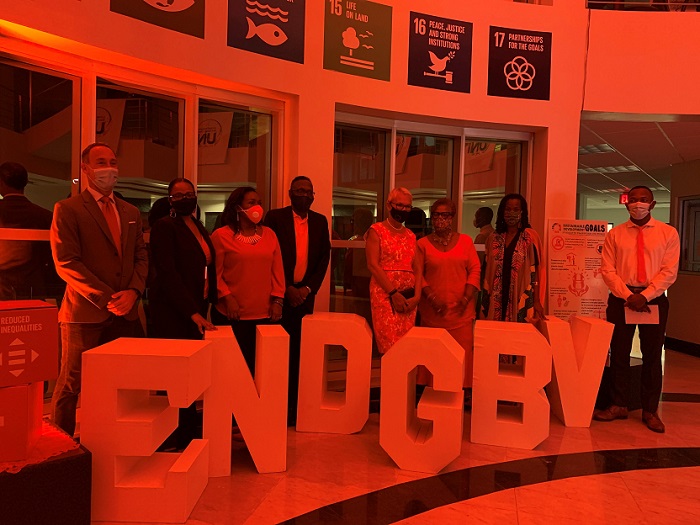 UN Women’s work on preventing and ending violence against women and girls on the 25th anniversary of the Beijing Platform for Action and through the global Generation Equality campaign amplify the calls to action of the UNiTE Campaign. In her impassioned remarks, UN Women MCO Caribbean Representative a.i Tonni Brodber shared:

“COVID-19 has not created the violence, what it has done is that it has exacerbated the risk factors that lead to violence. For example, frequent quarreling - 81% of women who experienced violence in the Caribbean region, indicate that they and their partners quarreled frequently.  COVID-19 has contracted our economies and created the environment for more arguments between partners. The issue is how do we ensure that violence is never one of the options that we use to end an argument. We must hold ourselves to account for the ways in which we have normalised violence; the ways in which we have accepted violence and in the ways in which we have not been our brothers’ and sisters’ keepers. That is what prevention is about. We need community now more than ever.  This is why we must Fund, Respond, Prevent and Collect.”

Head of the EU Delegation in Barbados Malgorzata Wasilewska said the EU and UN are natural partners in the efforts to shape a safer and better world for all. The Ambassador highlighted the EU-UN Spotlight Initiative where over USD30 million has been committed to address family violence in the Caribbean.  Referencing this year’s IDEVAW theme, the Ambassador stressed the cycle of violence must be ended:

“Indeed, the prevention aspect is vital for the EU in our fight against domestic violence and we believe that early and continuous education about domestic violence is necessary to tackle the problem at its roots. Because we know that when you are in a broken family and your role model is a violent male, boys grow up believing that this is the way they are supposed to act. And girls think that it is acceptable for men to treat them this way. Challenging public attitudes towards domestic violence is a complex yet critical goal”.

In addressing the forum, President of the Business and Professional Women's Club (Barbados Chapter), Nicole Alleyne-Phillips-Ayikpa, said the BWP Barbados Shelter Program grew out of the Crisis Centre Hotline more than 30 years ago in response to high incidences of domestic violence and rapes. She noted that the Shelter supports abused women, and their traumatised children, in partnership with Government, the United Nations, the British High Commission, the US Embassy, Rotaract Barbados, Sagicor and several other agencies that are committed to the elimination of violence against women.

“Our programmes at the Shelter for Abused women seek to address these issues, firstly to help our clients reject acceptance of blame and to see gender-based violence as what it is, an institutionalized problem that has to be destroyed.”

Barbados’ Minister of People Empowerment and Elder Affairs, the Honourable Cynthia Forde said the Government of Barbados, through the establishment of the National Committee on Gender-based Violence, remains steadfast in its commitment to the elimination of gender-based violence, particularly in the COVID-19 environment. The Minister added:

“Anecdotal evidence has suggested that there has also been an increase in cases in Barbados during the lock down period.  Therefore, we have ensured that during the pandemic, unemployed women have been given some protection to remain financially able to manage their households.

The lighting of UN House as part of the commemoration of the 16 Days of Activism, represents a proud moment for all stakeholders, all partners, the Government and the people of Barbados. 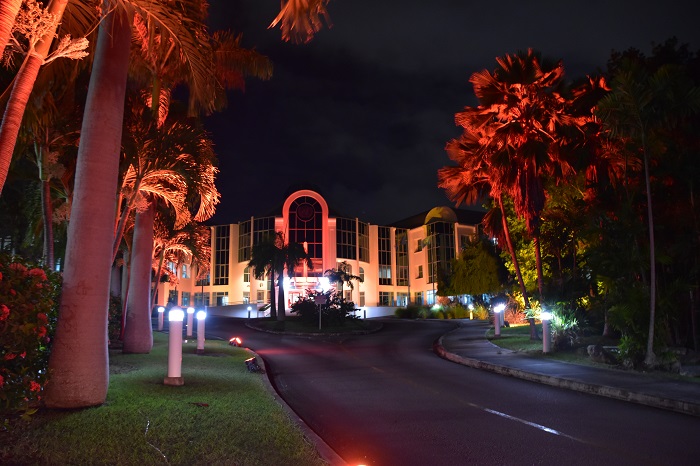 We are united in the fight to wrestle gender-based violence to the ground singly and collectively. Together we aspire, together we achieve.”

UN House will remain lit until December 10, Human Rights Day, which brings the curtain down on the 16 Days of Activism Against Gender-Based Violence.