In Defence of Gender Equality

Trinidad and Tobago, 05 June 2016: In a live link up, the Trinidad and Tobago Defence Force (the Regiment, Coast Guard, Air Guard, Reserves and Specialised Youth Services Programmes) demonstrated their commitment to gender equality through signing onto HeForShe. 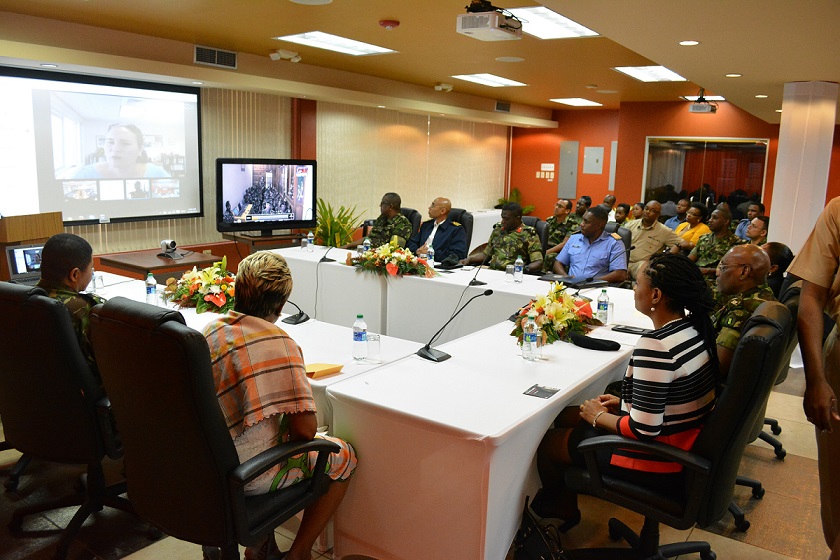 Acting Chief of Defence Staff (Ag CDS) Colonel Archie Phillips said their support was in acknowledgement of the efforts of the UN Women’s HeForShe Campaign as a solidarity movement for gender equality, as well as the energy and support of the Network of Rural Women Producers Trinidad and Tobago.

The ceremony led by the Acting Commander, included senior officers and enlisted ranks of the Trinidad and Tobago Defence Force, the Representative for the UN Women Multi Country-Office Caribbean Christine Arab, Minister of State in the Office of the Prime Minister with responsibility for Gender and Child Affairs, Ayanna Webster-Roy, Deputy Permanent Secretary in the Ministry of National Security, Ms Maria Joseph and the Network of Rural Women Producers Trinidad and Tobago (NRWPTT) , led by President Gia Gaspard-Taylor. The NRWPTT continues to mobilise commitment for the Campaign through its work to realise women’s empowerment and gender equality.

The Acting Chief of Defence Staff encouraged the members of the Defence Force to see their support for the initiative as a noble undertaking.

“As we gather to collaborate with a Network that has sought to address one of the most persistent failings of our time, that of gender inequality among women/girls and men/boys internationally, the Defence Force recognises that gender disparities do exist in Trinidad and Tobago, and as a sector of the society that is committed to supporting the efforts of civil society, we see it as a matter of importance that we continue to align ourselves in support of these types of initiatives.”

“We the Defence Force recognise that men and boys can play many roles: they can be marginalised and often voiceless victims, as well as perpetrators, silent bystanders, supporters and even advocates.”

Colonel Phillips explained that they had recently co-hosted with the United States Southern Command (US SOUTHCOM) the 2nd Regional Women in the Military Conference (WIMCON) which focussed on how military organisations across the region are doing (or not) with respect to the issue of championing gender integration issues within and across their forces.

“It is with some pride that I appreciated that notwithstanding the fact that we here in the Defence Force still have some way to go towards identifying and treating with some of the issues to which our still largely male dominated environment has to go, that we were not doing too badly generally. In that regard our efforts here today ought not to be seen as a mere public relations gimmick but rather another step along the way towards ensuring that sooner rather than later we would have assisted in advancing the cause of gender equality and integration to the point that noble efforts like these in the future would no longer need to be referred to as ‘HeforShe’ but more like ‘WeforUs’.

UN Women Representative Christine Arab noted:  “Given the crucial role of men and boys as advocates and agents of change, HeForShe provides a platform for men to self-identify with issues of gender equality and its benefits, which liberate not only women and girls, but also men and boys, from prescribed social roles and gender stereotypes.

In launching this initiative globally, UN Women notes that in addition to focusing on dialogue which is critical to establishing genuine and equitable partnerships between women and men, these initiatives are also aimed at challenging and eliminating attitudes, norms, beliefs and practices that perpetuate gender based discrimination and which reinforce tolerance for all forms of violence against women and girls.”

Minister of State in the Office of the Prime Minister with responsibility for Gender and Child Affairs, Ayanna Webster-Roy, highlighted that Trinidad and Tobago, through its military forces, was working to amass ten thousand (10,000) signatures, in support of gender equality as part of the HeForShe Campaign.

“The HeForShe Campaign puts men at the centre of activism and dialogue to end persistent inequalities faced by women and girls around the world. The end of these inequalities are not just to please the ‘womenfolk’, or make us look good to the world. There are real tangible benefits for individuals and the country. For our nation, gender equality can help boost employment rates, narrow pay inequalities and create stronger family connections,” the Minister added.
Related News
26/11/2021
All Young Women Leaders Parliamentary Sitting Debates Protection Against Sexual Harassment in the Workplace Act
19/10/2021
Innovative strategies and partnerships urgently needed to arrest women’s economic slide as a result of COVID-19
27/11/2018
Gender Equality Protocol for Trinidad and Tobago Judicial Officers Launched
03/06/2016
SDGs and Governance: Towards Realising Gender Equality
16/11/2021
UN Women Small Grant Advertisement under the Spotlight Initiative Trinidad and Tobago
END_OF_DOCUMENT_TOKEN_TO_BE_REPLACED