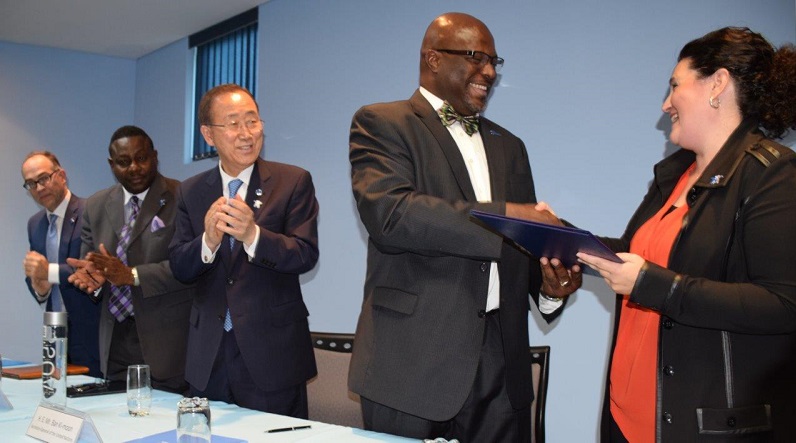 Bridgetown, Barbados: UN Women today signed a Memorandum of Understanding with the Office of the Attorney General of the Government of Barbados to support strengthening of the resources of the police and Courts to effectively respond to cases of violence against women.

It was on the occasion of the “Justice and Response – Ending Gender-Based Violence in Barbados” event held under the auspices of the visit of the United Nations Secretary-General Ban Ki-moon to Barbados.

Delivering the keynote address, United Nations Secretary-General Ban Ki-moon noted that too many women are afraid to seek help.

“One study showed that up to two thirds of all victims suffer without ever reporting the crime. I am outraged by this. Shame belongs to the perpetrators – not the victims. We have to change mindsets – especially among men.”

The UN Secretary-General told the audience that Barbados had been chosen for the Caribbean launch of his UNiTE to End Violence Against Women Campaign in 2010.  Under this campaign, Barbados hosted the 2012 UNiTE Conference that adopted the Bridgetown Declaration for Action to Prevent and Respond to Sexual Abuse Against Girls and Boys.

The UN Secretary-General added: “This country has been reforming its legislation and working to confront the problem. Today we take another step forward. The Memorandum of Understanding being signed by the Office of the Attorney General and UN Women will boost our joint efforts to end gender-based violence. It will give women greater access to justice. And it will help end impunity.”

Noting that he was the first man to sign onto the HeForShe campaign, the UN Secretary-General invited more men to take the HeForShe pledge and encourages all to join the UNICEF End Violence Campaign.

“And every day, I count on all of you to work for true equality”, the UN Secretary-General added.

UN Women Representative for the Multi-Country Office – Caribbean, Christine Arab noted that too often, Gender Based Violence and within it, Domestic Violence, are treated as a “soft” issue to be dealt with once the “hard’ issues of public crime are addressed.

“Yet, statistics repeatedly show that the most common form of violence in the Caribbean is Domestic Violence, largely experienced by women, girls and boys. The commitments taken today are to send the message that there is no violence in Barbados which is immune from prosecution; no violence which will be tolerated.”

Attorney General and Minister of Home Affairs of Barbados, the Honourable Adriel Brathwaite noted that in order to fully realise the national vision of Barbados, there is need to give equal measure to addressing insecurity both on the streets as well as in the homes.

“Through the signing of this Memorandum of Understanding, the Office of the Attorney General, in partnership with the Courts, Police and Ministry of Social Care seeks to improve court administration and the administration of justice by strengthening the ability of the Royal Barbados Police Force, the High Courts, and the Magistrates Courts – along with all court officers, to resolve cases on gender-based violence effectively and fairly in Barbados. My office will also seek to raise awareness among the general public about the rights to justice for those who have experienced Gender Based Violence.”