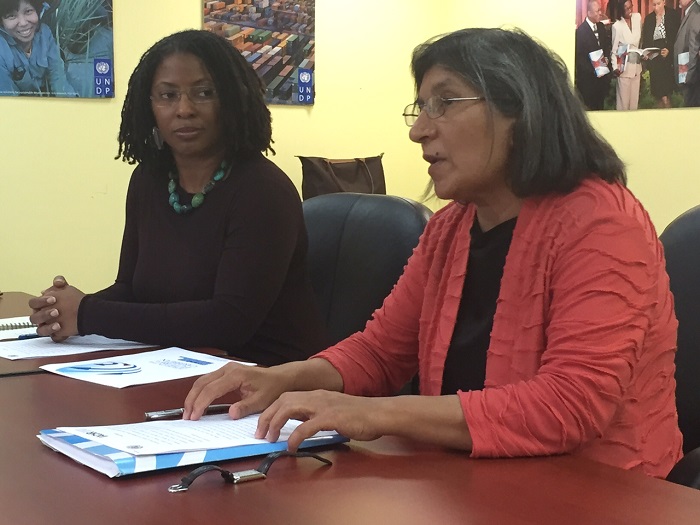 During their study visit, the Rapporteurs visited Jamaica,[1]Barbados, Dominica, and Trinidad and Tobago.  The Rapporteurs express their gratitude to the governments of these countries for their openness to this visit and their facilitation of meetings.  Dialogue with both State and non-state actors focused on priority issues concerning violence against women and girls and the prevention and response to this human rights violation.  Meetings were held with Parliamentarians, representatives from Government Ministries, law enforcement entities, Family Courts’ magistrates and staff, other magistrates and judges, indigenous community members, rural communities, university students and faculty, school children and teachers, service providers, civil society organizations and relevant United Nations entities.

The Rapporteurs note that many interlocutors described violence against women and girls as normalized, widespread and of pandemic proportions, and underreported. Some of the manifestations referred to within the home, community, workplace and in state institutions included psychological, physical, sexual, economic and institutional violence.  Human rights issues affecting lesbian, bisexual and trans women were referred to continuously in meetings, including practices described as “corrective” violence. The issue of a rise in the prevalence of gender-related killings, as the ultimate act in a continuum of violence, was also highlighted in some contexts.

The issue of sexual violence against girls was raised in all four countries as a widespread concern. For example in one country the Rapporteurs were notified by a government entity that 97 percent of all reported cases of child victims of sexual violence were girls. Interviewees stated that in many instances private resolution of these cases was undertaken between the perpetrator and the victim’s family.  Mention was also made of the disproportionate use of detention in the case of girls in need of protection, many of whom are victims of violence, for “wandering” or for being “uncontrollable”. The Rapporteurs also received information from both state officials and civil society that in some countries girls are incarcerated in adult facilities due to the lack of specific facilities for juveniles, which exposes them to the risk of institutional violence.

The normative framework and standards are articulated in the Convention on the Elimination of All Forms of Discrimination against Women, the Declaration on the Elimination of Violence against Women and the Inter-American Convention on the Prevention, Punishment and Eradication of Violence against Women (“Convention of Belém do Pará”). States have a duty to respond to all forms of violence against women and girls with due diligence in the protection, prevention, investigation, prosecution, punishment and provision of effective remedies, including reparations. The duty to respond to and prevent violence involves a set of measures including legislation, policies, programs, and services, which should be responsive to the needs of the women and girls.  The response of the State should consider the varying needs of different groups of women due to factors such as the history of discrimination and inequality, age, race, ethnic background, disabilities, sexual orientation and gender identity, among others.

The Rapporteurs acknowledge the efforts undertaken by the Governments to adopt and reform existing legislation concerning domestic violence and sexual offenses, to develop national gender policies, to create bureaus in charge of gender issues, and to provide a number of programs and services for victims of violence against women. Development of training programs, protocols and new institutions, particularly in the policing sector, were also noted. Comparatively less attention has been given to the issue of sexual harassment in various contexts. The Rapporteurs were also informed about the technical assistance being provided by UN agencies working in the Region, including in the implementation of awareness-raising campaigns, and also their support to the governments in processes concerning legal reform, the development of protocols and national action plans, and training initiatives, among others.

The Rapporteurs were also informed that crimes against women and girls were often met with a lack of accountability and effective remedies, and practices that revictimized those who made complaints. They were told, for example, that some in positions of authority minimized  sexual violence and described it as “just a little sex’’ and those interviewed indicated serious problems with the practice of “confrontations” between the victims and the alleged aggressors during police investigations.  The limitations of existing laws as well as the narrow interpretation and the lack of implementation of laws, policies and protocols were also noted as challenges. Regarding protection orders, in theory they should be speedy, effective and accessible but in practice they were referred to as just ‘pieces of paper’, which did not provide a holistic or effective response based on the needs of the victim.

In conclusion, the Rapporteurs would like to reiterate that a holistic approach to responding to and preventing violence against women and girls requires addressing individual, institutional and structural violence which disproportionately affects women and girls. Violence against women is a human rights violation, which precludes the realization of all other human rights and is a barrier to the effective exercise of citizenship rights.

Ms. Rashida Manjoo (South Africa) was appointed Special Rapporteur on Violence against women, its causes and consequences in June 2009 by the UN Human Rights Council. As Special Rapporteur, she is independent from any government or organization and serves in her individual capacity. Ms. Manjoo is a Professor in the Department of Public Law of the University of Cape Town. Learn more, visit: http://www.ohchr.org/EN/Issues/Women/SRWomen/Pages/SRWomenIndex.aspx

Tracy Robinson is a citizen of Jamaica. She was elected at the 41st OAS General Assembly in June 2011 for the standard four-year term, which began on January 1, 2012 and ends on December 31, 2015. She is the Rapporteur for the Rights of Women and the Rapporteur for the Rights of LGBTI Persons on the Commission. She held the post of Chair of the Commission from March 2014 to March 2015. She is also a senior lecturer at the Faculty of Law, University of the West Indies, Mona Campus.