Engaging men and boys as partners for gender equality 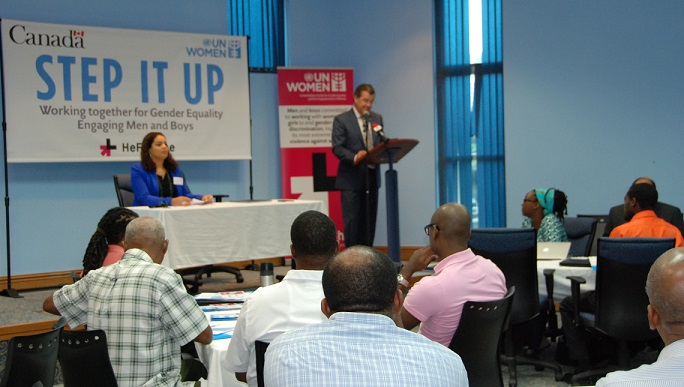 UN Women MCO Caribbean launched a series of dialogues across the CARICOM region on men as partners to realise gender equality, with the hosting of a masculinities and gender equality workshop (09-10 March 2015) at UN House Barbados in partnership with the Government of Canada.

Men were drawn from various disciplines including activists, community and social workers, peer group advisers and members of the local men’s organisation participated in the sessions.

The workshop focussed on:

The workshop was facilitated by Dr. Peter Weller, Chairman of the regional Caribbean Male Action Network (CariMAN) which aims to bring together men and organisations throughout the Caribbean engaged in work with and for men, and Dr. Tracie Rogers who has wide experience using participatory approaches to work with men and boys around gender equality and ending violence against women and girls. Both facilitators work with UN Women in developing group-based psycho-educational intervention tools for young men and women with a view to strengthening community-based prevention of gender based violence. One outcome being explored is the establishment of a Barbados chapter of CariMAN.