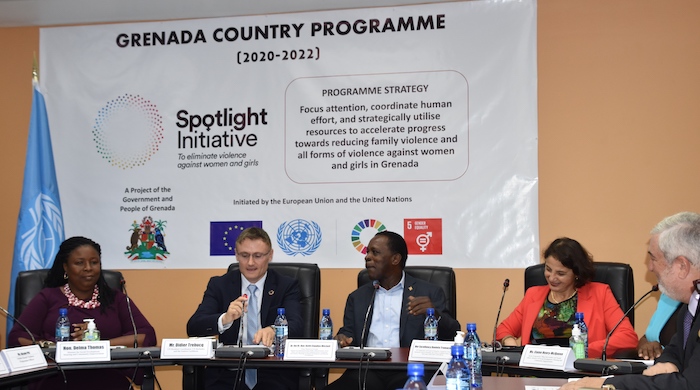 Grenada, 5 March 2020.  In commemoration of International Women’s Day, which will be officially observed on March 8, the Government of Grenada, the European Union and the United Nations today partnered to launch in Grenada the Spotlight Initiative. This is a global joint United Nations and European Union initiative aimed at eliminating all forms of violence against women and girls. With a total financial commitment of €500 million by the European Union, the Spotlight Initiative is being implemented in all continents. The Caribbean will receive €50 million for implementation of a Caribbean Regional Programme as well as a number of country-level programmes. Grenada is one of six countries selected in the Caribbean, together with Belize, Guyana, Haiti, Jamaica, and Trinidad and Tobago that will benefit from a specific country allocation to respond to family violence.

The high-level launch brought together senior government officials, Members of Parliament, representatives of the European Union, the United Nations and civil society organisations, as well as officials from the private sector, the media and academia. It began with an official Signing Ceremony of the Project Agreements in the morning and ended with an evening Lighting Ceremony that culminated with the illumination of the Parliament Building, with the coloured lights expected to remain lit for seven days. The latter, signifies the programme’s intention of shining a spotlight on violence against women and girls, to give prominence to this issue, while supporting prevention, protection, service provision and women’s economic empowerment.

Reaffirming the commitment of the Government of Grenada to ending violence against women and girls, The Honourable Prime Minister told persons attending the launch: “We consider this issue to be so crucial because of its impact on all aspects of our lives, and we pay a heavy price socially and economically. Grenada recognises that gender equality is required if we are to experience a state where there is harmony and progress for everyone.”

Ambassador to the Delegation of the European Union to Barbados, the Eastern Caribbean States, the OECS and CARICOM/CARIFORUM, Daniela Tramacere, in delivering remarks underscored that "Our success will be measured by the positive impact made in the lives of victims. We all have a role to play. Watching silently from the sidelines is not an option".

In his address, United Nations Resident Coordinator, Didier Trebucq, lauded Grenada’s ongoing efforts.  “I want to commend the Government of Grenada for its leadership in addressing the issue of gender-based violence, and in actively mainstreaming the SDG Agenda into its country programming. This provides a strong framework for the UN to increase its joint support to the country, by leveraging the individual strengths of our UN agencies to deliver results that will reduce violence against women and girls in Grenada and enable them to fulfil their potential.”

Chairperson of the Interim Civil Society National Reference Group, Jeannine Sylvester highlighted the critical role of Civil Society Organisations (CSOs) in this fight. “As CSOs we have always had the task of and renew our commitment  through the launch of this project today, to continue to speak out on the issue of GBV and educate people within communities of the negative impact of all forms of violence especially on our women and girls."

Violence against women and girls remains one of the most widespread, persistent and devastating human rights violations in the world today. In the Caribbean, gender-based violence, including intimate partner violence, is identified as one of the most prevalent forms of violence, sustained by a culture of silence and denial, presenting a major obstacle in the achievement of the Sustainable Development Goals.

The Spotlight Initiative will therefore see the UN System for Barbados and the Eastern Caribbean, the Government of Grenada, and civil society organisations partnering to respond to family violence through legislative and other measures. The Program will be implemented in two phases: the first which will end in December 2021, and the second phase concluding in December 2022, with Grenada receiving a funding envelope of €2 million for the entire duration of the programme.

Over the next three years, the joint programme will focus on delivering the following actions: reform of the  procedural law governing the conduct of legal proceedings and  enhanced victim rights policy frameworks for improved service delivery: improving the capacity of national institutions to  plan, fund and deliver evidence-based programmes that prevent and respond to Violence Against Women and Girls (VAWG); and expansion of existing programmes that promote positive social norms and prevent family violence against women and girls. The initiative also supports improving the delivery of services to survivors of family violence, collection, analysis, monitoring, storage and dissemination of VAWG data and implementation of activities which focus on improving the capacity of national civil society organisation’s to design, implement and monitor VAWG prevention programmes; and establish social accountability mechanism and outreach and advocacy initiatives.

The Spotlight Initiative in Grenada will contribute to the achievement of gender equality, peace, social inclusion and protection of human rights, which are catalytic for sustainable development (particularly SDGs 5 and 16) and inclusive growth, in accordance with Agenda 2030, as well as the priority areas of the UN Multi-Country Sustainable Development Framework, and the Grenada’s Gender Equality Policy and Action Plan (GEPAP).