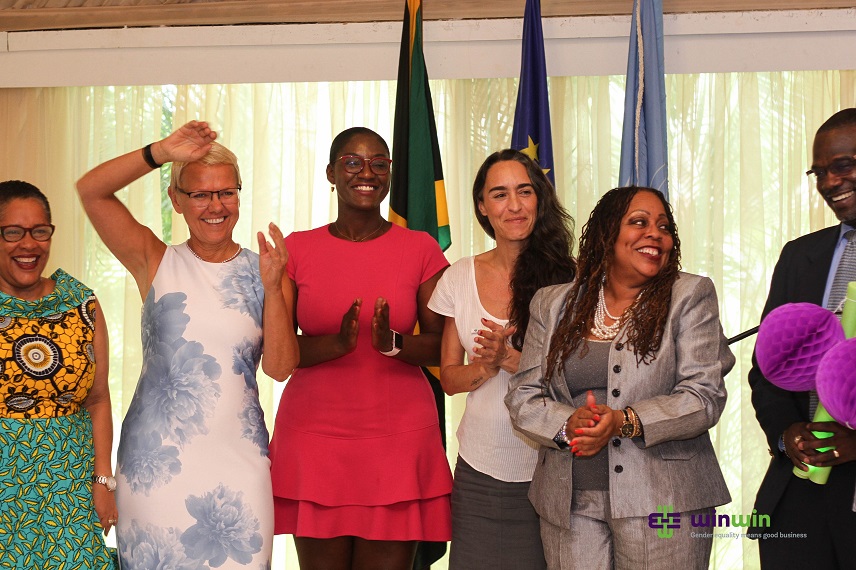 Kingston, Jamaica – 30 September 2018: Jamaica has been encouraged to work to realise the vision of a Prosperous Inclusive and Enabling society, that enables women to have an equal opportunity for a share of the “Economic PIE”.

This from Representative of UN Women Multi-Country Office – Alison McLean at the launch of the Win-Win: Gender Equality means Good Business Programme in Jamaica.

UN Women Regional Coordinator, Esther Senso, told the launch event that unconscious bias and gender-based violence are barriers to women’s access to a full range of opportunities, and are both based in the deeply rooted causes of gender-based discrimination.

“During the last decade across Latin America and the Caribbean, there has been significant progress towards gender equality and the empowerment of women, however women’s economic empowerment and hence economic independence is absolutely necessary to reach higher rates of economic growth and greater macroeconomic stability”, Ms Senso added.

Head of Delegation of the European Union to Jamaica, Ambassador Malgorzata Wasilewska also highlighted that Jamaica had made significant efforts in closing the gender gap in terms of women who work in public administration.

“But we know that despite the strides being made, Jamaica still has some way to go to fully achieve its own targets. Too many women are still being affected by violence. Many of our households are headed by women who face abuse which is connected to economic dependency. If we empower our women, help them to gain economic independence, we would be improving creating a better society,” she added.

Ms. Vanessa Phala, Senior Specialist, Employers' Activities ILO Decent Work Team and Office for the Caribbean said statistics confirm that global progress towards gender diversity is mixed and moving slowly for women who aspire to attain top management positions or serve as chairpersons or members of company board.

“In 2017 we concluded a Caribbean regional report on Women in Business and Management, we collected over 600 responses from 13 Caribbean countries and from Jamaica alone we collected about 50 responses. We are expanding on the WIMB survey for Jamaica and as a result we will be collecting additional surveys to develop a much more comprehensive national report for Jamaica with clear recommendations”, Ms. Phala added.

Jamaica is the lone Caribbean country participating in the Win-Win: Gender Equality means Good Business Programme which is being implemented in Latin America and the Caribbean (LAC).  It is a strategic partnership between UN Women, the International Labor Organization (ILO) and the European Union (EU) for the promotion of gender equality in the private sector.  The other countries Argentina, Brazil, Chile, Costa Rica and Uruguay.

UN Women National Private Sector Specialist for Jamaica, Denise Chevannes Vogel explained that a scope of the Jamaica business environment showed that: gender stereotyping persists - women are segregated educationally and occupationally; women’s enterprises are in the low-growth sectors and there are constraints in access to productive resources and women often have difficulty accessing finance and lack the requisite business skills.

Ambassador Wasilewska stressed that therefore one of the biggest gaps that needs to be addressed is the absence of a truly enabling environment that institutionalises support for women – and men. “We need the kind of environment that enhances women's capacity and autonomy to lead businesses and fully become economically empowered in a way that really has a positive ripple effect on the society – socially, politically and economically. The number of women managers, while a positive signal, should not mask the fact that that is just part of the story. Women can be equally excellent business leaders, but the environment must be accommodating to facilitate them not just as middle managers but leaders in their own right”.

The goal of the Programme is to promote the economic empowerment of women through acknowledging them as beneficiaries and partners of growth and development and increasing the commitment and capacities of private and public actors to drive organizational change regarding gender equality and women´s empowerment, the UN Women Win-Win Regional Coordinator added.

The three main outcomes of this 3-year Programme are:

The EU Ambassador said the programme’s objectives thus aligns with Jamaica's Vision 2030 National Development Plan, the EU's Gender Action Plan 2016-20 and ultimately, Agenda 2030 and “So, the EU is proud that Jamaica has joined Argentina, Brazil, Chile, Costa Rica, and Uruguay in this three-year Programme”.