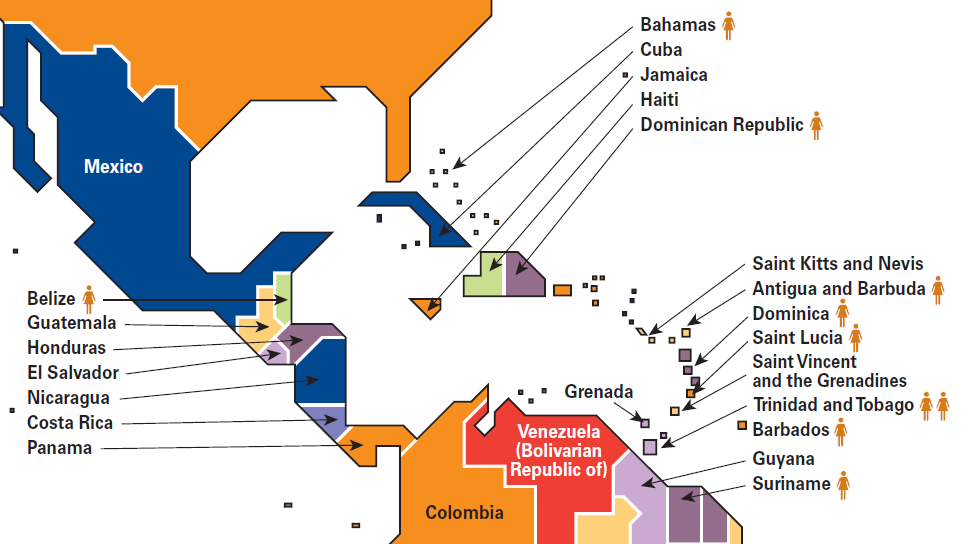 Bridgetown, Barbados - While Dominica, Grenada and Trinidad and Tobago are among the countries in the Caribbean and Americas region where women ministers are nearing or exceeding the gender parity position of 30 per cent of representatives, the number of women in executive government and in parliament worldwide has stagnated, with only marginal improvements since 2015, according to the data presented in the Women in Politics 2017 Map launched today by the Inter-Parliamentary Union (IPU) and UN Women. The Map, which depicts global rankings for women in the executive and parliamentary branches of government as of 1 January 2017, shows slow progress towards gender equality in these areas at regional and national levels. The presentation took place at a joint IPU-UN Women press conference in New York, in the context of the ongoing session of the Commission on the Status of Women (CSW61).

Women’s political empowerment and equal access to leadership positions at all levels are fundamental to achieving the Sustainable Development Goals (SDGs) and a more equal world. With limited growth in women’s representation, advancement of gender equality and the success of the SDGs are jeopardized.

“These developments show that progress in gender equality remains slow in all structures of power and types of decision-making. Power is still firmly in men’s hands, and although we have witnessed some positive trends—for example, the current record number of 53 women Speakers of Parliament out of 273 posts, globally—much remains to be done if women are to play on a level field with men,” said IPU Secretary-General Martin Chungong. “Equal representation in positions of power is a fundamental precondition for truly effective and accountable democracy.”

The number of women Ministers barely changed, rising to a total of 732 (compared to 730 in 2015); women’s participation at the ministerial level now stands at 18.3 per cent.

The top five countries with the largest share of women ministers are in Europe and the Americas. Bulgaria, France, Nicaragua, Sweden and Canada have surpassed the 50 per cent mark of women in ministerial positions. These results can be largely attributed to a clear political commitment at the highest decision-making level—both France and Canada’s leadership have committed to parity in government—and to a genuinely gender-sensitive political culture. Sweden has the world’s first self-proclaimed feminist government, and Bulgaria has seen an overall increase in women’s participation and decision-making in all spheres of power in public and private sectors, both nationally and internationally.

By contrast, Finland and Cabo Verde—which in 2015 had high rates of women ministers, ranking first and second, respectively—fell significantly behind. Finland saw a dramatic decline in women ministers in 2017, dropping from 62.5 to 38.5 per cent. Cabo Verde, normally a high-flyer, fell from 52.9 to 25 per cent (a 52.8 per cent loss of its share of women cabinet members).

“These data powerfully tell the story of the persistent missing voice of women,” said UN Women Executive Director Phumzile Mlambo-Ngcuka. “We can see that over time, the overall proportions of women in politics are changing for the better, although certainly not fast enough. However, the overall stagnation and specific reversals are warning bells of erosion of equality that we must heed and act on rapidly. The drive to protect women’s rights and achieve substantive equality for women in leadership will take joint action across parliaments, governments, civil society and international organizations. This must include the repeal or amendment of existing discriminatory laws, and the support of women in all forms of representation, including at the highest levels of government.”

Continuing a trend since 2015, Africa saw a steady decline in the number of women ministers.  Women hold 19.7 per cent of the region’s ministerial posts in 2017, having first surpassed this percentage in 2012 after seven years of rapid progress. The Congo and Zambia outperformed the rest of the region, adding four and six women ministers and reaching women’s representation rates of 22.9 per cent and 33.3 per cent, respectively.

2017 saw the Americas make significant gains, bringing women’s representation to 25 per cent (from 22.4 per cent in 2015) and setting a new regional high; however, the region saw a drastic drop in women Heads of State/Heads of Government after the Presidents of Brazil and Argentina left office. Canada and Nicaragua surpassed gender parity in ministerial positions, while Trinidad and Tobago and Uruguay approached or exceeded 30 per cent. By contrast, Brazil continued its downward trend, dropping from a 25.6 per cent representation rate in 2014, to 15.4 per cent in 2015 and finally, four per cent in 2017.

In Asia, women held 11 per cent of ministerial posts (from 10.6 per cent in 2015). Indonesia became the country in the region with the highest participation of women in government (25.7 per cent), while Viet Nam and Nepal experienced steep declines drifting below five per cent.

In Europe, the total percentage stood at 22.5 per cent (up slightly from 21.6 per cent in 2015). Remarkably, while the Nordic countries have traditionally led on women’s representation in politics, the 2017 data shows this region suffered the largest setback globally with a 6.2 per cent drop in the number of women ministers from 2015, although women still account for 43.5 per cent of the executive in the region overall. Bulgaria, where women’s representation rose to 52.9 per cent from 17.6 per cent in 2010, quickly climbed the ladder in the world ranking from 45th to 1st. The United Kingdom and Romania gained the most women ministers in absolute terms (three), while Estonia, Belarus and Italy lost the most (two).

After steady increases in women’s representation since 2012, the Pacific region stagnated (remaining at 13 per cent, as in 2015). Given the small size of the region (only 14 countries), slight changes in numbers have significant impact in terms of the share of positions held by women.

The IPU-UN Women Map, supported by Global Affairs Canada, the department that leads Canada’s international development and humanitarian assistance, also calls attention to the fact that women continue to hold the lion’s share of so-called ‘soft issue’ portfolios in government. However, there is evidence of some change: for the second time since 2005, the Family/ Children/ Youth/ Elderly/ Disabled portfolio is not among the two most common women-headed Ministries. At 8.7 per cent, the Environment/ Natural Resources/ Energy portfolio is for the first time the most commonly held portfolio by women ministers, followed by Social Affairs at 8.2 per cent.

Data on women ministers reveals that 30 per cent of environment ministers are women (47 out of 161), a 10 per cent increase from 2015. IPU research indicates the ascent of the environmental category is likely due to the appearance of a few, very recent, new portfolios such as Climate Change and Sustainable Development, which are held by women to a considerable extent. Of particular note, there is a change in the number of women in charge of women’s affairs, with a 10 per cent decrease to 64 women ministers out of a total of 77 ministries. This means that the number of men leading this ministry is on the rise.