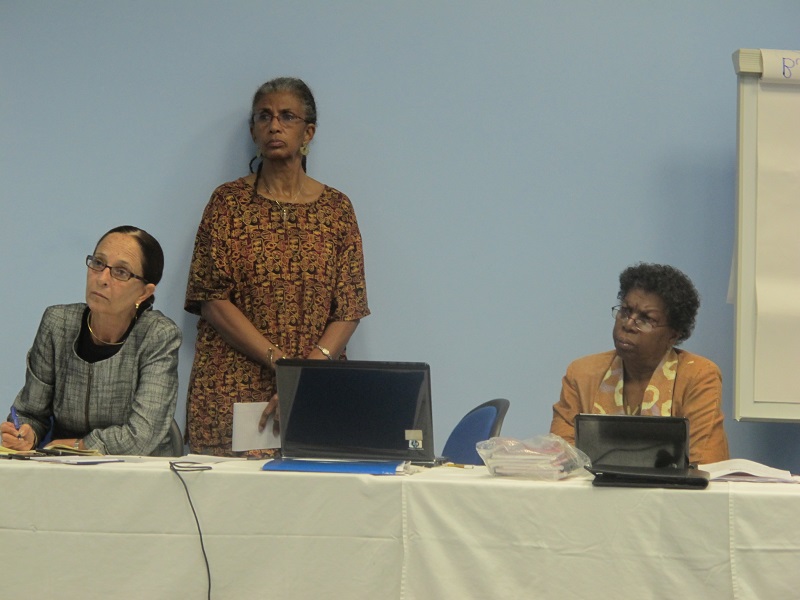 From left: Kathy Mangones (former UN Women Representative), and long-standing Caribbean feminists and activists Judith Wedderburn, Director Friedrich Ebert Stiftung (FES),  Jamaica and Hazel Brown, Head of the Network of NGOs of Trinidad and Tobago. Photo: UN Women/Sharon Carter-Burke.
Over the years, UNIFEM/UN Women has had the benefit of partnership with Friedrich Ebert Stiftung (FES) in the Caribbean on such a range of issues - trade, green economy, political participation, governance.

In the moments of thinking through the global gender architecture, we turned to the Caribbean feminist community to meet with the High Level Coherence Panel. Led by Judith Wedderburn, Caribbean women made very strong recommendations for the strengthening of UNIFEM and for the establishment of a well-resourced agency to accelerate gender equality globally.

Yours is a vision of inclusion, of social justice, non-hierarchical social relations and accountability. And so importantly under Judith’s leadership, FES was committed to advancing Caribbean integration and regionalism.

Indeed there was not a time when we approached FES with an issue and were not able to rely on your guidance and partnership.

In this photo taken at the first meeting of partners post establishment of UN Women, we were discussing expectations. So much commitment!

FES is a German non-profit foundation. UN Women MCO Caribbean salutes FES which celebrated its 90th anniversary in March 2015, and has had a presence in Jamaica since July 1974, when a formal agreement was signed with the University of the West Indies, formalising the role of FES in the establishment of what has grown into CARIMAC on the Mona Campus.