On the occasion of the beginning of the 16 days of activism and the commemoration of November 25, International Day for the Elimination of Violence Against Women, the regional offices of UN Women, UNFPA, UNAIDS, UNICEF and the Pan American Health Organization, presented a flagship program for the eradication of child marriage, as an action to prevent violence against women and girls and to make this region a region free of child marriage.

Child marriage is a cause for concern in Latin America and the Caribbean, where 18% of young women between the ages of 15 and 29 – almost 1 in every 5 – are married or in an informal union. Child marriage constitutes a violation of girls’ human rights and it is a harmful practice for their health, education and integrity, in addition to impacting their future development and increasing the risk of suffering violence.

This regional initiative promotes changes in the laws to eliminate all the legal exceptions to the minimum marriage age. Even though all the countries in the region have established, in their respective legislation, 18 years as the minimum marriage age for both sexes, several of them allow child marriage with parental consent or consent of a legal representative or judicial authority.

The objective of the program presented today is to have a region free of early marriage in two years. 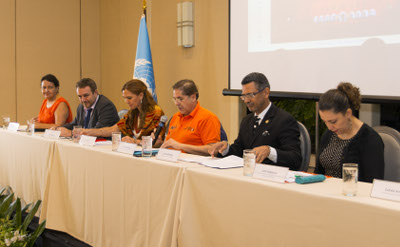 From left to right: Alejandra Corao (UNAIDS), José Bergua (UNICEF), Lara Blanco (UN WOMEN), Martín Santiago (UN Resident Coordinator – Panama), Cosme Moreno (Ministry of Social Development – Panama), and Lola Valladares (UNDPA). Photo: UN Women/Agustín Aguilar.
The United Nations in Mexico, Guatemala and Ecuador are advancing in diagnosing the problem and generating visibility. A first achievement of this initiative is highlighted in Guatemala where a recent decree established the same marriage age for boys and girls, eliminating the exceptions to the minimum marriage age of parental consent or guardian authorization and making judges listen to the minor. Unions with minors were also prohibited. In the case of Mexico, the General Law on the Rights of Children and Adolescents came into effect in December 2014, establishing the age of 18 as the minimum marriage age.

To date, all but three Mexican states have harmonized their state laws. In Ecuador, in June 2015, a reform of the Civil Code was approved that established the age of 18 as the minimum marriage age, without legal exceptions.

This year, the actions of the United Nations Secretary General’s “UNiTE to End Violence” campaign center on the prevention of violence against women, adolescents and girls. The Campaign calls for governments and the civil society to mobilize: the prevention of violence is a task for all. November 25th is also the beginning of the 16 Days of Activism, ending on December 10th, Human Rights Day, and mobilizes people around the world to carry out actions that build a society free of violence against women and girls.

“To protect and promote the rights of women and girls is our priority. We will not rest until we guarantee a life free of violence for women and girls in the region. We encourage all to become agents of change and generate impact in their environment, because all actions matter”, affirmed Luiza Carvalho, UN Women Regional Director for the Americas and the Caribbean.

Related News
14/11/2022
Building a Strong Foundation for Trinidad and Tobago Young People to Escape from Gender-based Violence
10/11/2022
Spotlight Jamaica and Grenada - Call for Proposals For Non-Governmental Organisations (NGOs)-Media Partners
09/11/2022
A Caribbean Model for Resilient, Inclusive, Smart, and Safe (RISS) Cities
28/10/2022
Vacancy: Statistical Editor to Review Six Reports on the Economic Costs of Violence against Women and Girls in the Caribbean and Sexual Harassment in the Workplace
26/09/2022
Caribbean Spotlight Initiative Small Grants to Scale-up Technical Substantive Capacity of Caribbean CSOs
END_OF_DOCUMENT_TOKEN_TO_BE_REPLACED