Protecting their crops through green technologies, Caribbean women fend for themselves

Through workshops, women farmers in Barbados, Grenada and Jamaica are learning more sustainable farming techniques and securing their livelihoods. 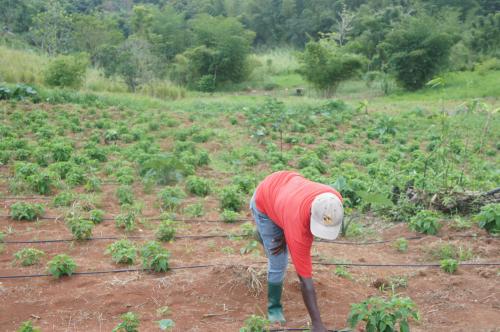 A farmer using new water-management techniques in Jamaica. Photo courtesy of The Competitiveness Company at Guy’s Hill in Jamaica.

With UN Women support, the Caribbean Policy Development Centre (CPDC) has led a project focused on women agricultural producers’ role in sustainable development in the Caribbean. Implemented in Barbados, Grenada and Jamaica, the project aims to reduce women’s lack of access to resources.

Their crops include Irish potatoes, organic mushrooms, strawberries, vegetables and other fruit for the production of juices, pepper sauces and dried fruits. The women sell them at local markets in their communities and to tourists.

“After I began growing mushrooms, I was able to support my family. For now, I sell mainly to hotels,” says 52-year-old Theresia Msacky, from Grenada.

For many women, farming is their only income, particularly if they have children still in school.

Through workshops on the evolving green economy – an approach that will result in improved human well-being and reduced inequalities, while not exposing future generations to significant environmental risks and ecological scarcities – the women learn to use more sustainable farming methods as a more stable and reliable way of making a living.

Theresia said the workshops taught her about the value and importance of protecting the environment for her livelihood. She learned about water conservation and rain-water harvesting.

“We learned about the importance of crop rotation,” she explains, “not planting an entire area in one crop but rotating the area … and using natural materials in the environment to conserve the moisture and increase the fertility of the soil. Now I am also using natural barriers like lemongrass to eradicate the crop pests.”

In Jamaica, in the north eastern parish of St. Mary’s, the Jeffrey Town Farmers’ Association which has 40 members, half of them women, is employing renewable energy to power a radio station. It broadcasts information about sustainable farming practices to a hilly community of 3,000.

Romae Ormsby, one of the managers, explained that they were able to share experiences on how to combat land slippage. She added that the CPDC workshop also offered valuable knowledge on how to increase their strawberry production through greenhouse growing. The women currently also produce and sell a coconut-based confectionary.

“We are trying to get a bigger building; we want to expand production,” says Romae. “We are also trying to produce flour from breadfruit [a tropical fruit tree] so the women can feed their children, develop themselves, and it can be a source of employment.”

Through a separate UN Women-supported project of non-governmental organization, The Competitiveness Company, in the community of Guys Hill, Saint Catherine parish, Jamaica, 18 women were given access to irrigation. They were also trained in the use of technologies to improve irrigation and other water-management strategies. With rainfall patterns that limit crop seasons and farms located on steep hillsides, the women farmers are better able to mitigate against flooding, land erosion and land slippage and are using the best agricultural practices for their environment.

“The discussions and sharing of experiences (during the CPDC training) gave the work of the women validity,” says Hilda Vaughn, one of the officers with The Competitiveness Company with the collective of 18 women in Guys Hill. “It showed others what women like themselves were able to achieve by employing new technologies,” such as greenhouses, solar energy and water harvesting. The women were also reminded of the value of traditional methods of farming like intercropping – using crops that repel insects mixed with the economic crop to reduce the cost of pesticides.

“In the Caribbean, young women outperform young men in secondary and tertiary education, and yet when it comes to active labour market participation or economic empowerment, women are most likely to be unemployed, underemployed, or poor,” says Christine Arab, UN Women Representative for the Caribbean region. “Through supporting local NGOs in bridging the gender divide in the areas of agriculture education, infrastructure investment, and a strengthened understanding of the laws and services which promote women’s security in the home and in public spaces, UN Women believes that women’s livelihoods will be secured, thereby enhancing the resilience of local communities in the face of the economic challenges facing the Caribbean.”

For more information on Women and the Environment, check out the In Focus editorial package on the new Beijing+20 campaign website.