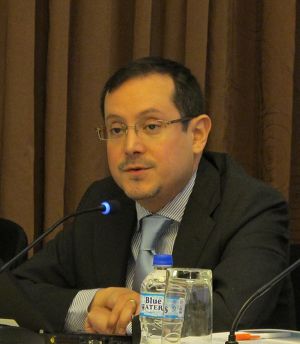 Senior Programme Specialist at the International Development Research Centre (IDRC Canada) Mr. Francisco Cos-Montiel
In trying to develop responsive HIV and AIDS prevention policy for the Caribbean taking into account gender and sexual culture, there needs to be a much greater awareness and understanding about sexuality as a matter that belongs in the public domain.

Senior Programme Specialist at the International Development Research Centre (IDRC Canada) Mr. Francisco Cos-Montiel noted that matters of sexuality are seen as belonging to the private sphere and hence sexuality is one of the areas where the lack of a comprehensive public policy is more evident.

“Being aware of the cultural and unconscious aspects of sexuality may help recognize less restrictive and prescriptive approaches, and therefore to better understand what role these aspects play in processes such as the HIV infection.

The IDRC representative was at the time addressing a regional meeting in Trinidad to look at developing gender-responsive human rights-based policy for HIV/AIDS prevention through multi-sector policy and programme support. The seminar was being held to consider the findings of studies where researchers took a case study approach looking at adolescents in Barbados, at youth culture in Trinidad and at conjugal relationships in Suriname. The research project was focussed on gaining a deeper understanding of the dynamics between sexual cultures, gender relations, and HIV/AIDS in the Caribbean.The research was supportedthe IDRC and UN Women.

He noted that when discussing issues about sexuality and policy it is easy to refer only to matters of sexual orientation.

“However, it is necessary to fully understand sexuality and not restrict it exclusively to questions of sexual orientation. While sexual orientation is relevant, sexuality also pertains to the deeper desires that everybody -male or female, gay or straight, live, consciously and unconsciously, as part of their sexuality…desire when expressed in sexuality, and especially when acted upon, tends to be seen as deviant, wrong and in need of being morally sanctioned, he added.

This then leads to a public policy dilemma: how to legislate certain practices that are carried out –mostly- in the private sphere:

“But how to legislate or, even better yet, how to design public policies for the diverse expressions of desire expressed in sexuality? The question is not easy to answer and poses serious challenges for public policy makers. We need to understand sexuality in the context of politics and public policy, and not as a matter of "deviation", but as a key aspect that has a bearing on the decisions of people and on the fate of society.”

Mr. Cos-Montiel stressed that trying to regulate or make public policy on sexuality through a rational choice approach is risky, that for example, to assume that in the face of the AIDS epidemic people will rationally change their behavior overnight is “naïve at best, and dangerous at worst”. In other words, he said, “you can tryto rationally change the way people engage in sex, but not the drive of desire”.

He explained that the belief that private affairs were not of the concern the State had sadly prevented policy intervention for decades.

“Perhaps the most emblematic case is the State`s belated recognition of violence against women as a public matter. As it took place within the home, it was considered to belong to the private domain and not to a sphere where the State had the obligation to intervene and protect the physical and emotional safety of women”, Mr. Cos-Montiel added.

The IDRC Senior Programme Specialist said the research offered new and fascinating light into the study of sexuality and HIV in the Caribbean. UN WOMEN (formerly UNIFEM), in partnership with the University of the West Indies HIV/AIDS Response Programme (UWIHARP) at Cave Hill, Barbados, the Centre for Gender & Development Studies – UWI St. Augustine, Trinidad and Foundation Ultimate Purpose Suriname undertook this research project in the three countries with support from the International Development Research Centre (IDRC). The study was premised on awareness that unequal gender relations are central to explaining the transmission of HIV/AIDS in the Caribbean. This is especially important since young Caribbean women are believed to be the most vulnerable group in the spread and transmission of HIV/AIDS.

Related News
04/02/2022
16 facilitators trained to tackle HIV and violence against women and girls as EU/UN Spotlight Initiative supports Foundations Programme Training of Trainers Course
29/11/2019
Statement by UN Women on World AIDS Day, 1 December
01/12/2017
Statement by UN Women Executive Director: Leaving no one out from health
22/06/2016
Call for Proposals on Support to Girls and Young Women living with HIV&AIDS (Extended)
12/06/2012
UNAIDS - Every minute a young woman is newly infected with HIV
END_OF_DOCUMENT_TOKEN_TO_BE_REPLACED