Breaking the Culture of Stigma and Discrimination 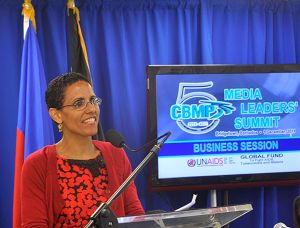 (Photo compliments CBMP) - Roberta Clarke, UN Women Regional Programme Director
Today, on World AIDS Day, one day after the celebration of Barbados Independence Day, we are here to promote a certain kind of change and to further advocacy and action.

I link World AIDS Day to Independence because the Independence project all across the Caribbean was shaped by a deeply held popular aspiration for a greater freedom, for equality, for self-determination and self-responsibility. And it is precisely those values that we need to invoke to halt the spread of the HIV epidemic.

When we say HIV, we are talking about a disease yes, but it is a disease in the Caribbean that is incubated in the culture of social inequality and gender discrimination. It grows in the context of poverty, and it feeds of cultural and societal indifference to the lives of those we marginalise. It flourishes where there is stigma, bias and denial of rights to autonomy and security.

And so halting and reversing the spread of HIV can be best and most sustainably accomplished when we also address the factors creating vulnerability, that is the conditions where some are more likely than others to be infected and affected by the epidemic.

Because HIV is largely transmitted in the Caribbean through sexual relations, there is very little about vulnerability to HIV in the Caribbean which is not affected by how we view and treat ourselves and each other as men and women.  And so, there can be no sustainable progress in halting HIV unless we change harmful gender stereotypes and unequal power relations. These inequalities are experienced most directly by women and men in the private sphere where decisions about sexuality, reproduction and personal security are made.

In the culture of inequality, gender-based violence thrives. The Caribbean is a dangerous place to be girl or woman if the statistics are to be believed. All Caribbean countries have higher than the global average rates of sexual assaults. Violence against women is both a cause and consequence of HIV. Women report contraction of the virus as a result of rape both by strangers and by persons with whom they have had partnerships. And that their experience of physical assault may be exacerbated by disclosure of HIV positive status.

During this 16 day period of Activism to end Violence against Women within which World AIDS Day fall, and which ends on Human Rights Day, we need to reflect hard on our Caribbean’s failure to normalise zero tolerance to gender-based violence.

Beyond violence, young women are especially vulnerable to abusive, transactional and exploitative sexual relationships. In the Caribbean, we have the sub-cultural phenomenon of intergenerational sexual relationships where young women have relationshipswitholder men for material and monetary gain and the enhancement of peer popularity. In these situations, the girls are at risk of physical harm and violence, pregnancy and HIV. Building self-esteem and the ability to make self-protecting choices among young women and young men must be a core objective of families and of the education sector.

Economic inequality coupled with gender inequality is at the heart of the challenge for sexual and reproductive health and rights. Where so many men refuse to be responsible parents, women with disproportionate reproductive caring responsibilities are exposed to economic dependency and this limits capacity to demand safe sex practice.

And the impacts of unequal and stereotypical gender relations are also negative for men who are trapped in a hard masculinity which creates its own dangers for men’s sexual and reproductive health. In the Caribbean, many men refuse to seek medical attention, including resisting HIV testing.  We glorify homophobia, refusing to understand the range of normal human sexuality and expression. And it is this homophobia that accounts in part for risky sexual practice. Caribbean culture also expects early sexual debut by young men, multiple partnerships, unsafe sexual practices, aggression and violence in domestic relationships. In one study after the other, we get data that exposes the pressure young boys are under to perform as sexual men. This is harmful and boys too need better child protection.

So today, one day after Barbados’ independence, we share the idea that we all have both personal and collective responsibility to ourselves and others to prevent harm and to protect the vulnerable. The change we need comes at the level of culture. Culture is the sea that we all swim in.

How do we build societies where we hold firmly to the idea that all individuals are entitled to enjoy the range of human rights, to be treated equally, to be able to speak freely, to feel secure in both private and public spaces, to have access to quality health, decent work?

The change that needs to happen must be both in policy making and at community level. But change starts with self. We all are now called upon to be advocates for independence at the personal level.

We need to break the silence around sexuality, to end ignorance through the promotion of inclusive dialogue. We must offer a safe, confidential and responsive environment within which people can speak openly about their feelings about sexuality, violence, inequality. And we need to offer compassion.

In our times of 24/7 mixed media messaging in which young women and young men are exposed to highly objectified and sexualised notions of femininity and where acceptable masculinity is clothed in hyper-aggressiveness, it is our mission to strengthen a youth culture which is grounded in equal respect, in empathy and care.

Our work together, is to make the gender equality norm, normal in culture.