Building Political Will to End Gender Based Violence 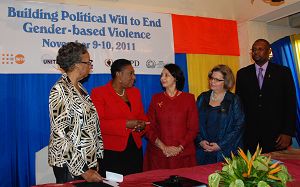 Photo /UN Women : (second left) The Honourable Olivia Grange, Minister of Culture, Youth and Sport, Jamaica with (from left) Professor Barbara Bailey Recipient of the Ninth CARICOM Triennial Award For Women, Ms. Geeta Sethi, Director UNFPA Sub-Regional Office for the Caribbean; Ms. Nadine Gasman Senior Manager for the United Nations Secretary-General UNiTE to End Violence against Women Campaign for Latin America and the Caribbean and Senator the Honourable Winston Williams, Minister of State attached to the Ministry of Education, Sports and Youth Affairs of Antigua and Barbuda and member of the Caribbean Network of Parliamentarians on Population and Development - CNPPD
Regional Parliamentarians have come together at the Terra Nova Hotel in Jamaica to look at ways in which they can lead policy and community interventions to end violence against women and girls.

Themed, “Building Political Will to End Gender-Based Violence”, the November 9-10 meeting is one of the initiatives in support of the UN Secretary-General Ban Ki-Moon’s UNiTE to End Violence against Women Campaign.

Addressing the opening ceremony, the Jamaica Minister of Youth, Sports and Culture, the Honourable Olivia Grange stressed that gender based violence is a grave problem affecting all cultures, societies and regions.

“Gender based violence is a violation of human rights that affects males and females – but most of the victims are women and girls. It takes many forms – physical, sexual, psychological and economic”, the Minister said.

Minister Grange reported that in Jamaica in 2010, more than 600 women were victims of rape and 500 victims of carnal abuse. “These cases aside from the untold hurt that they caused the victims and their families also put a burden on a health care system that is already struggling to deal with unpreventable health issues.  Gender based violence also affects the rate of HIV infections in our societies”, the Minister added. 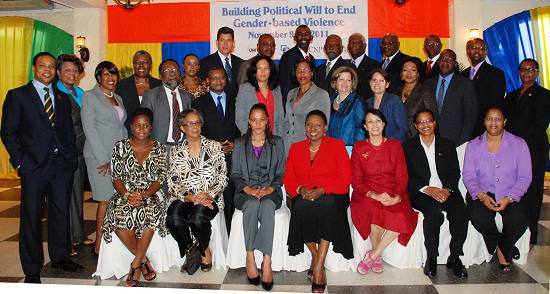 The Consultation also builds on one of the actions agreed to at the 2010 Caribbean launch of the campaign, which calls on national parliamentarians to join in the leadership of the Campaign. It focuses on sharing best practices to end gender based violence and looking at new strategies including working with men, cultural artistes and other opinion shapers.

Minister Grange exhorted her regional Parliamentary colleagues to commit to taking a firm stance at the policy level to combat the problem. Additionally she said there was need to engage partners and synchronise energies towards ending the scourge of violence against women and girls on Caribbean societies.

United Nations Resident Coordinator for Jamaica, Mr. Arun Kashyap told the Parliamentarians that they were vital leaders to make the theory of change a reality.

While ratification is a vital and necessary first step, it will only become sufficient through strengthening State accountability and its efficient and effective enforcement.  While this would require political will and engagement of men as provocative partners and agents of change, it would necessitate a social strategy that empowers women in achieving comprehensively a high quality life, sustainable livelihoods and equal opportunities to eliminate all facets of discrimination”, the Resident Coordinator added.

Campaign Manager for the Latin America and Caribbean UNiTE Secretariat Nadine Gasman told the participants: “We are especially concerned in this region by the fact that besides having high rates of all types of violence we have in Latin America,the highest rates of femicide-where thousands of women are killed because they are women with an increasing degree of crueltyand sadism and because 3 of the top 10 recorded rape rates in the world occur in the Caribbean.

“It is important for the Secretary-General’s UNiTE Campaign to have the opportunity to interact with you, officials elected by the people, working for the wellbeing, security and exercise of all human rights of all the people,” Ms. Gasman added.