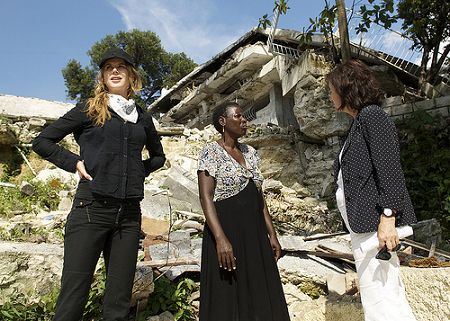 UNIFEM Goodwill Ambassador Nicole Kidman and UNIFEM Executive Director Inés Alberdi in front of the ruins of the house of Hermione M. (center), a schoolteacher who now conducts educational activities with children of the surrounding temporary shelters. (Photo: UNIFEM/Catianne Tijerina)

United Nations, Port-au-Prince - During a visit that concluded today, Inés Alberdi, Executive Director of the UN Development Fund for Women (UNIFEM, part of UN Women) and UNIFEM Goodwill Ambassador Nicole Kidman have called for the urgent need to address gender-based violence among affected populations, and stressed the critical need to support long-term initiatives that advance women's livelihoods as part of the rebuilding efforts. In Haiti, Ms. Alberdi and Ms. Kidman met with survivors of violence living in a temporary camp, with Haitian and UN officials, and with national non-governmental organizations working to support women's needs in recovery efforts after the devastating earthquake.

"During this trip I saw first-hand how this humanitarian disaster is impacting women and girls. The lack of shelter and security makes them more vulnerable to violence, in particular sexual violence," UNIFEM Goodwill Ambassador Nicole Kidman said. "Yet, I have also seen the determination and resilience of women and men in Haiti to rebuild their country. Today I visited a temporary shelter for women and girls who experienced sexual violence or are at risk, where women leaders work to make sure there are medical and legal services as well as counselling and livelihood training. This needs to be done on a large scale and they need our support."

Even before the earthquake hit, violence against women and girls was pervasive. A national census in 2006 found that one in three women in Haiti had experienced violence. Women in Haiti also carry the disproportionate burden of care for children and other family dependents. Some 45 percent of households are headed by women, many defined by stark poverty, due to lower educational levels and lack of opportunities on the formal labour market. The average annual income of women in Haiti is US$626, compared with US$1,695 for men. Meetings with women advocates during the visit highlighted women's economic empowerment as a priority, including the immediate need to integrate women in jobs creation programmes and provide access to credit and training opportunities for sustainable livelihoods.

"The women of Haiti are working hard to rebuild every aspect of their life, but they need adequate and sustained support for their safety and security," said Inés Alberdi, Executive Director, UNIFEM. "There is also a critical need to address the longer term development needs of women, such as income opportunities, and the restoration of schools for their children. Both as a matter of right and as smart development and security policy, women must be centrally included in the planning of post-disaster relief and recovery. Significant funding must be directed to increase gender equality and gender equality must be a priority in Haiti. We must support the efforts of Haitian women and men to build a fairer and more durable society out of this tragedy."

In Port-au-Prince, Ms. Kidman and Ms. Alberdi visited the only shelter for survivors of violence in Haiti, run by the organization Kay Fanm, a UNIFEM partner. Since the building that housed the facility was destroyed during the earthquake, 13 young girls, some with their children, have found temporary shelter. By now, tents have made way for plywood cabins, providing some protection from the torrential rains during the wet season. For the young women and girls, it is a safe heaven.

"I feel secure. I get shelter and food and can concentrate on learning," said one of them who was kidnapped and abused a year ago and has since lived in the organization's shelter. She is now attending school to continue her education and hopes to become a pediatrician.

"Addressing sexual and physical violence has been a central issue in the efforts of our partners in civil society and the Government to advance women's human rights in Haiti for years," said Kathy Mangones, UNIFEM Country Programme Manager in Haiti. "The work that UNIFEM is carrying out with them after the earthquake builds on these efforts, yet now, more than ever, sufficient resources and political will are needed."

In another encounter during their stay in Haiti, Ms. Kidman and Ms. Alberdi met with a former school teacher, who is now trying to provide some educational activities in the garden of her destroyed house to the children of the surrounding temporary shelters.

UNIFEM has been working on programming in Haiti since 2004, with a country office established in 2007. The country office focuses on enhancing women's economic security and rights, ending violence against women, and advancing gender justice in democratic governance. UNIFEM Haiti works closely with the Ministry of Women's Affairs and Women's Rights (MCFDF), community-based women's organizations and civil society, including traditional religious leaders and men's associations. In the aftermath of the devastating January earthquake and in partnership with national partners, UNIFEM Haiti has prioritized addressing key challenges, including developing strategies for service provision, addressing prevention and response to sexual and gender-based violence, ensuring opportunities for women's voices to be heard, and strengthening the integration of women's needs in the humanitarian response.

For the latest news on the visit and UNIFEM's relief efforts, click here.