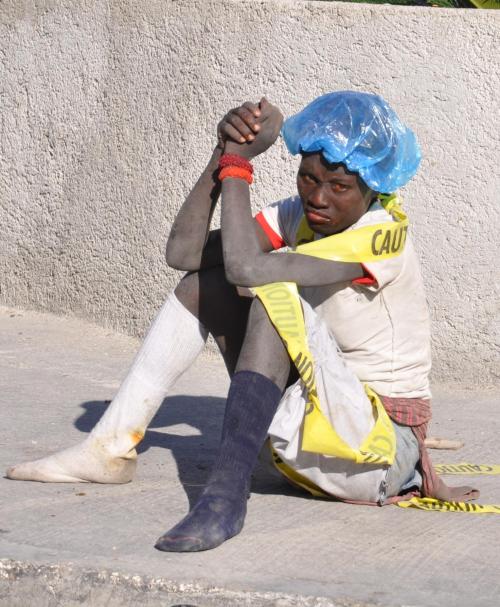 Credit: Mouvman Moun Mango
At 4:53 one month ago, Haiti was irrevocably changed. The earthquake of January 12th 2010 has become a line of demarcation- between the before and the after. The sound of the earth shaking, the din of buildings collapsing and the veil of dust which covered the sky of Port-au- Prince, of cries rising from surrounding neighborhoods and hills echoing throughout the city, and the redness of the sun as it set, in the early tropical twilight, as it marked the end of this momentous day. And then the deep silence of the night punctuated by community efforts to save the living and the wails of women and men mourning their dead. The rising sun brought light and confirmed the devastation of the earthquake and its enormous toll on the country, its institutions, and its people, and above all, the women and their families.

As earthquakes make geological faults apparent, earthquakes also make social fault lines more apparent reflecting the lines of exclusion and marginalization. The fault lines of social class, gender and disability are highlighted and their impact on relative vulnerability and resilience becomes even clearer. These fault lines also reconfirm, once again, the imperative to actively engage in transforming these social constructs and the need to swell the ranks of advocates for social change and champions of gender equality.

On January 12th, Haiti lost several of its champions- women who have been at the forefront of the battle for social change and gender equality- Myriam Merlet, Magalie Marcelin, Anne Marie Coriolan. Myrna Narcisse Theodore, Mireille Neptune Anglade- as well as countless other unknown women and girls who in their own way were also committed to change and to building a better future for Haiti. I think of the women leaders of community and neighborhood associations, I think of the teaching nuns in Bel Air who died when their building collapsed, I think of the many little girls in their uniforms who were doing after school studies, I think of the mambo and hounsi in Carrefour who died in their peristyles while providing support to their communities. I think of the marchandes- who day after day are out on the sidewalks adjacent to buildings engaged in petty trade to ensure the economic wellbeing of their families, I think of the maids and other household helpers in the countless houses destroyed. I think of the restaveks, most of whom are little girls, who were sent by their families to a better life in the city and found themselves in a situation of forced servitude. I think of the nurses in the health centres, I think of the women police officers who integrated the police in the hopes of a better future and perhaps the desire to ensure that the police could better respond to the needs of women and girls.

In the aftermath of the earthquake, as we commemorate our lost colleagues and family, we can also celebrate the determination of women and their families to affirm life, to celebrate life and to demonstrate active solidarity to their neighbors. I see the women in the temporary shelters trying to rebuild a sense of security for their families, making connections with their neighbors, and sharing what they have to make it through the day and the night. In the empty lots, public squares, sports stadiums, and in secondary streets and lanes, I see the lights of tet gridaps in front of tents or more often plastic sheeting or salvaged sheets and tablecloths which serve as shelters, the sound of voices telling stories, singing and affirming day after day the strength of survivors. I see the women in the mornings- with the coming light, struggling to find water to drink, to cook, to bathe, to get together a bit of food, to take care of the sick and wounded, and then setting up their bac, to sell whatever they can- canned goods, candles, fruits, vegetables, and leaves, to bring in some money to once again ensure the continuity of life. Dignity, determination, agency, and strength. Man da, Madanm Jean, Ti Soeur.

Outside of the capital, in hundreds and thousands of small towns and villages across the country, I see the women heads of households struggling to see how to take care of the influx of family members and friends who have fled the capital. Providing them with shelter, food and above all with a sense of security and attention. Already struggling with limited capital and resources, they are digging deep into their meager reserves to respond to the immediate needs of the expanded family- and comprising at the same time their ability to ensure continuity of their gardens with the upcoming planting season. Dignity, determination, agency and strength. Madanm Jacques, Benita, and Janine.

The aftermath of earthquakes and other natural disasters puts women at the forefront in their roles as caregivers, as economic actors and as the builders of 'community'. Disasters also put women and girls in a situation of increased vulnerability to violence in general and to sexual and gender-based violence in particular. The disruption of community which comes with massive displacement of populations, the struggle for daily life in a context of limited resources which foments anger, frustration and desperation, and the collapse or increased fragility of institutions and as a consequence, the rise of impunity create a perfect storm. We know that this type of situation leads inevitably to an increase in domestic violence as well as other forms of sexual and gender-based violence.

What do we know ?

We know that the risk is higher. We know the organizations and institutions which provided services, including safe havens, to women and girls who were survivors of violence have been severely weakened and as a result are far less able to reach out to women and to provide much needed support, We know that the referral and data collection pathways which were being built with support from UNIFEM and other partners have been severely affected and that the flow of information has been disrupted.

Above all, we know that the risk of sexual and gender based violence can only continue to rise day by day.
It is not an issue of whether the number of rapes recorded is higher or lower than before the earthquake- any rape is unacceptable. Also we do know that despite significant progress as a result of the efforts of the Ministry of Women and of womens organizations which led to a higher rate of denunciation by women and girls, the number of rapes and other forms of sexual violence is always under reported.

What we know is that we must act and act now: to accompany national partners to reestablish their institutional capacity to provide services to women and girls who are victims of violence; to strengthen their abilities to provide services to women and their families in the temporary shelters existing throughout Port au Prince and as displaced populations are moved from the public parks and empty lots to designated spaces which can accommodate them; and to reopen safe havens for women and for girls who are in imminent danger.

The massive scale of the January 12th earthquake in Haiti goes beyond the capacity of any single sector or group to respond and requires that the efforts of women's organizations, civil society organizations, the private sector and the State, in collaboration with international partners such as UNIFEM as well as active solidarity from sisters in Latin American and throughout the world, come together in common cause and purpose to rise to the challenge.

It is in this response, these multiple energies and common purpose that we can best commemorate the women who died, both those who were at the forefront of the struggle for gender equality and women's rights and the many, many, unknown women and girls. It is in ensuring that humanitarian assistance responds to the differential needs of women and their families- and in ensuring that women's voices are not stilled, and that their needs are not forgotten. As one of our departed feminist colleagues and friends always reminded us; equality is not only the goal, it is also the path.

UNIFEM is committed to supporting this process, and supporting national partners not only to respond to the urgent and critical needs of women and their families today- but ensure that women's voices are part of the discussions on building a new Haiti. Caution- it is far too easy to lose sight of this. The fault lines of exclusion and inequality must be addressed in order to build a more solid foundation for the future and harness the potential of Haiti's women and men in defining the Haiti which they want to build.

UNIFEM counts on the support of the global community to join us in actively supporting the path of equality through the provision of dedicated gender equality financing and in ensuring that all support provided also includes clear gender equality goals and targets.

Related News
01/02/2010
Making Haitian Womens Voices Heard
17/01/2010
In Haiti Secretary-General Vows Support for Quake Victims
15/01/2010
UNIFEM Executive Director on the Earthquake in Haiti
13/09/2021
UN Women: Being amongst the most affected by the earthquake, women’s and girls’ meaningful participation and leadership are crucial to an effective and successful humanitarian response
26/08/2021
UN Women works in Haiti to ensure that the humanitarian response reaches out to women, incorporates their voices and proposals
END_OF_DOCUMENT_TOKEN_TO_BE_REPLACED