UNiTE Campaign Launched in the Caribbean 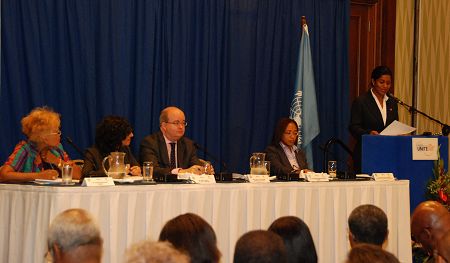 The meeting is being attended by Attorneys General, Chief Justices, members of the judiciary, senior representatives of regional police forces as well as stakeholders from civil society organisations from across the Caribbean.

Secretary General  Ban Ki Moon said: "I am glad that so many ministers, civil society representatives and artists from around the region are taking part in this launch. This campaign must involve everyone, from schools and street markets to parliament and the courts of justice."

The Secretary General welcoming the intent to discuss the underlying causes, costs and consequences of gender-based violence in the Caribbean region, noted: "This violence, here and elsewhere, may have complex historical and cultural roots which must be understood before they can be tackled."

United Nations Resident Coordinator for Barbados and the Eastern Caribbean, Ms. Michelle Gyles-McDonnough told the meeting participants that this Caribbean launch feeds into and contributes to the global campaign.

"Regrettably, like everywhere, levels of violence against women in the Caribbean are high," the Resident Coordinator added.  She says the meeting would focus on deepening the understanding on the causes, the consequences and responses to gender-based violence in the Caribbean; building a consensus on law and social policy reform and implementation goals, within the context of the Secretary General's Campaign, that can bring meaningful change to the lives of women and girls in the Caribbean and the full enjoyment of human rights.

UNIFEM (Part of UN Women) Regional Director for Latin America and the Caribbean, Ms. Gladys Acosta stressed that the meeting signalled another firm commitment of action where the Caribbean Member States were embarking on a far-reaching dialogue on the needed actions to address all forms of violence against women and in so doing strengthening accountability and the full enjoyment of human rights.

The UN's commitment to ending gender-based discrimination has been reaffirmed by actions taken to establish the UN Entity for Gender Equality and the Empowerment of Women - UN Women and further strengthened with the recent appointment of Ms. Michele Bachelet, a dynamic global leader, to head this new entity, said Ms. Acosta.

In addition, the recently concluded special summit on the Millennium Development Goals sent a clear message that the realization of the rights of women and children must be at the very core of our final push to attain these Goals by the deadline of 2015.

Dr the Honourable Esther Byer- Suckoo, Minister of Labour in her remarks, noted that the journey towards ending violence against women had started a long time ago, and while more was known about the issues that will influence changes in behaviour, knowledge, legislation, and policy were not enough.

"People must in fact relate the changes to personal benefits first and then other benefits must be perceived," Minister Byer-Suckoo noted.

"To prove the point, we must make the linkage between domestic violence and the social and economic cost to the individual, the family and the state.  It is unfortunate, that we must reduce it to figures, but there is a general acceptance, that money talks.  So there is money talking when we utilize our hospital and other health services.  Money talks when we pay for the use of police and other judicial services in the quest for protection orders, sittings of the judges and the magistrates.  Money talks when there is a reduction or loss of productivity. And we could go on and on and count the economic and social cost of domestic violence."

In addition, the Presidents of the International Tribunals for former Yugoslavia and Rwanda, Judge Patrick Robinson - a Jamaican national- and a native of Saint Kitts and Nevis, Sir Dennis Byron also participated in the conference sharing the lessons that have been learnt at the international level and how can those lessons be translated in strengthening the law response at the national domestic levels.

Additionally, audios from the Conference are available on the Radio Internacional Feminista website at - http://www.fire.or.cr/index.php/english-home/qunite-to-end-violence-against-women