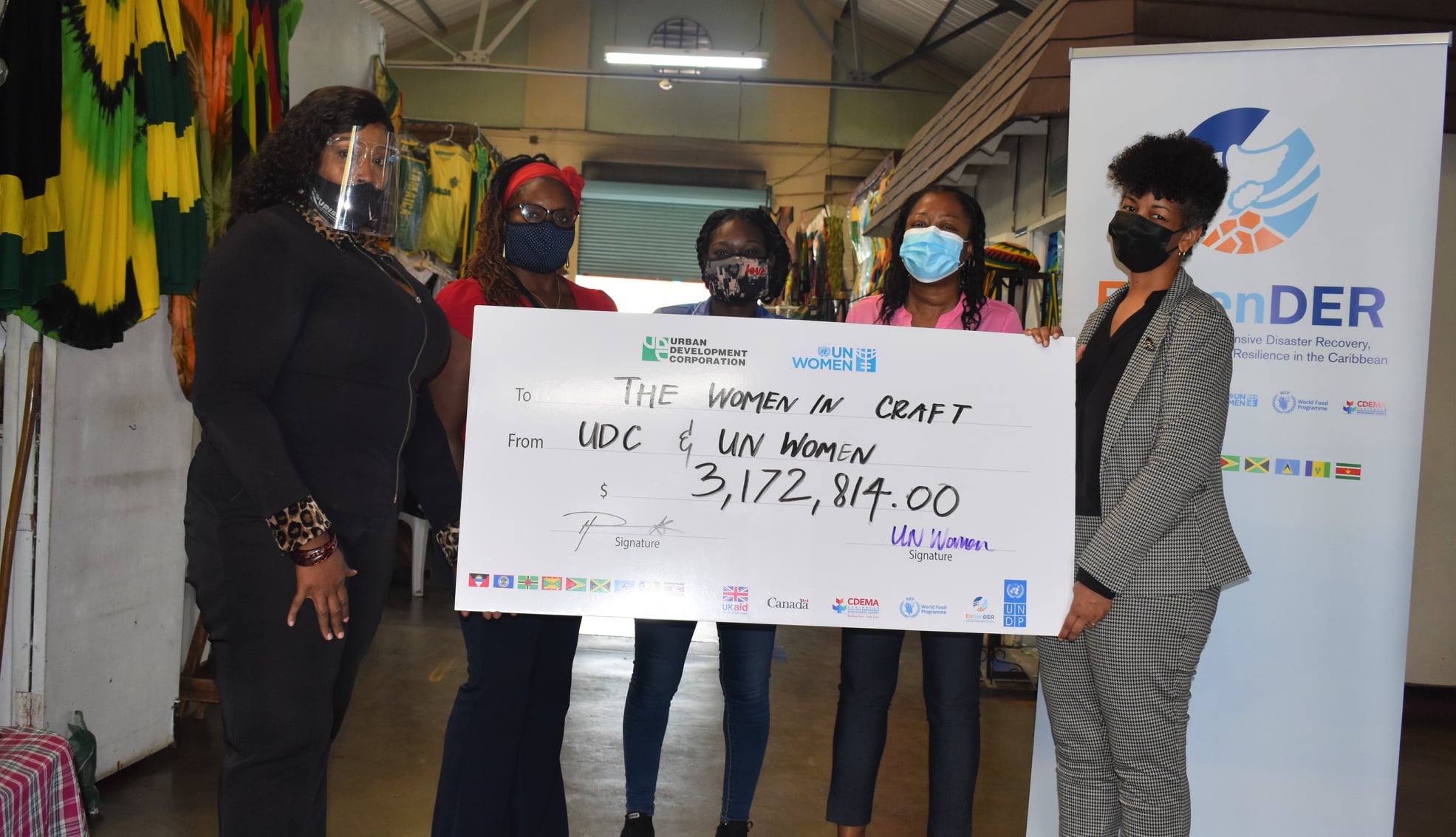 Search the hashtag "Jamaica" on Instagram and you will be greeted by an endless number of photographs and videos of white sandy beaches, people dancing to the latest dancehall beat, perfectly plated traditional meals and local influencers showcasing their daily lives. However, a key subsector of the tourism and hospitality industry which employs more than 8,000 people is missing: the craft industry.

This past year, the COVID-19 pandemic severely impacted the tourism and hospitality sector – one of the key economic drivers of Gross Domestic Product (GDP) – due to border closures or restricted movement. This economic shock also extended to craft traders, many of whom are responsible for their families’ livelihoods and are women. What did this mean for those whose livelihoods were reliant on tourist arrivals?

Ms. Clare Bruce, a craft trader from the Pineapple Craft Market in the tourist town of Ocho Rios, recounted her experience over the last 15 months:

“It was devastating because we just had to go home, relying on whatever resources we had. So that meant if we had a little savings then that is what we lived on and just kept hoping for the best. We returned to work a month ago. We are not operating at full capacity because a lot of traders are still home saying that it doesn’t seem fruitful to return to work; but for some of us, we are just holding on  to our businesses for dear life.”

Farrah Blake, Director of the St. Ann Development Company, a subsidiary of Jamaica’s urban development planning entity - the Urban Development Corporation (UDC) - said the experiences were the same for those operating at the Dunn’s River, Ocho Rios and other craft markets.

“The tourism industry took a direct hit. What keeps Ocho Rios alive is tourism and picture this vivid picture, what was keeping you alive, just stops! If they did beadings, paintings, sculptures, or whatever way they earned a living, it all came to a complete halt. Individuals and their families were directly affected because one day they were earning and then another day they were not,” Ms. Blake said. 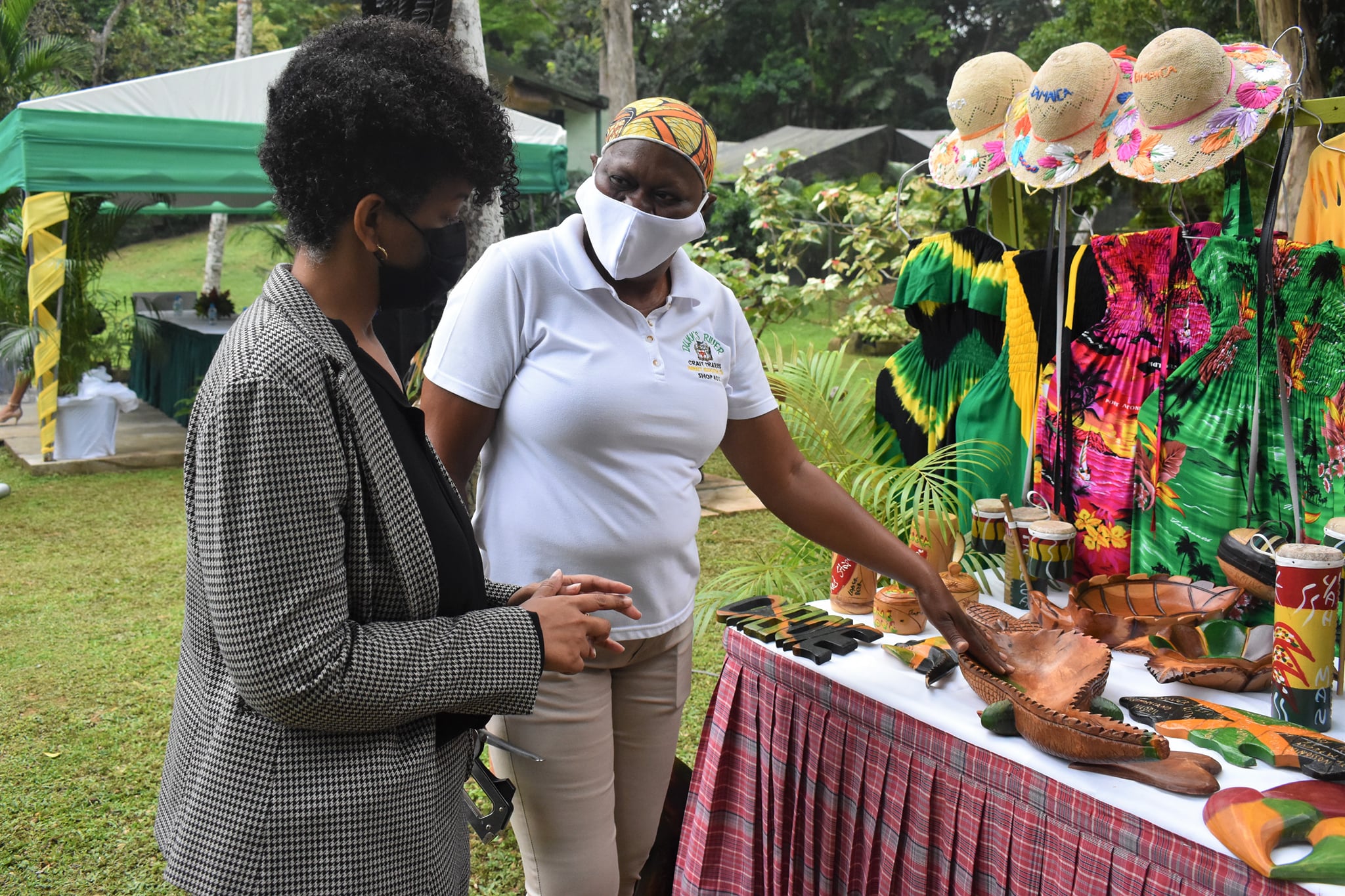 UDC officials viewed women product displays during the EnGenDER grants launch.
Under   the   Enabling,   Gender   Responsive   Disaster Recovery,    Climate and Environmental Resilience (EnGenDER) Project and through a broader partnership with the UDC, UN Women distributed cash subventions to provide a temporary safety net to the vendors. Global Affairs Canada readily agreed to the repurposing of the EnGenDER funds for the subventions, to support the most vulnerable in response to the economic disruptions caused by COVID-19.

Ms Bruce who also serves as the secretary for the Craft Traders Association at the Pineapple Craft Market said, “We were excited to be receiving the grant which came just in time. The traders were grateful that somebody remembered us in craft. I remember one trader saying when they received the grant that they will use it to go to the supermarket because at least ‘I will have food’.”

Ms Blake said the initiative was the first of its kind during her tenure to recognise the needs of women in craft. Both women encouraged craft traders to become better equipped for future economic shocks by saving, investing and maximizing on available resources to keep their businesses alive, such as using social media to access local and global marketplaces.

Ms Bruce concluded with this advice, “I have learned as well as other traders a drastic lesson that it will not be roses every day and we are not to take a job for granted. If you can, do more saving; if you can, invest in something else as “old time people” used to say don’t put your eggs in one basket. I would encourage traders to save, have an investment and do something else outside of the craft sector to have a backup.”