This initiative is expected to result in an increase in women’s economic empowerment and leadership in Jamaica as well as building the commitment and capacity of the private sector to implement gender equality and inclusion programmes for the benefit of both women and men, from the shop floor to the executive office.

This was disclosed during the recent signing ceremony for sixteen Jamaican private sector companies that have committed support for the Women’s Empowerment Principles (WEPs) being promoted by UN Women under the Win-Win Gender Equality Means Good Business Programme.

The WEPs were launched by UN Women and UN Global Compact in 2010 as part of a call for a multi-stakeholder approach to gender equality. The initiative has already generated the support of over 2000 prominent business leaders from around the world. The WEPs promote the inclusion of gender equality strategies as a cross-cutting component of corporate sustainability and private sector development frameworks.

The WEPs initiative seeks to throw the spotlight on the importance of ensuring equal pay for work of equal value, and support for women entrepreneurs and women-owned businesses. It is also aimed at promoting formal and decent work opportunities for women throughout the pipeline including executive leadership and decision-making positions. The Women’s Empowerment Principles are the guiding platform of the Win-Win Gender Equality Means Good Business Programme. This is a regional programme for women’s economic empowerment being implemented in Jamaica, Brazil, Costa Rica, Uruguay, Argentina and Chile under a partnership among the EU, UN Women and the International Labor Organisation.

The signing for the private sector collaboration was part of a recently held round-table event organized by the UN Women Multi-Country Office under the theme “Improving Profitability and Sustainability - Promoting Gender Equality in the Jamaican Private Sector”.

Existing pioneer WEPs signatories joined new participants and other private sector companies in the round-table discussion which was preceded by updates by representatives from Brazil, Argentina, Mexico and Uruguay on the global and regional situation of WEPs and the private sector. There were inspiring testimonials from forerunner Jamaican WEPs signatories such as PROCOMM’s Jean Lowrie-Chin, Island Grill’s Thalia Lyn and Women’s Entrepreneurial Network’s Ethnie Miller Simpson.

Remarks were also delivered on behalf of Honourable Minister Olivia Grange of the Ministry of Culture, Gender, Entertainment and Sport by Dr. Siddier Chambers, Acting Director, Community Development/Liaison at the Bureau of Gender Affairs. Mr. Fredrik Ekfeldt - Minister Counsellor/Deputy Head of Mission, Delegation of the European Union and Mr. David Wan - President Jamaica Employers’ Federation also addressed the event that was held at the Pegasus Hotel in Kingston. 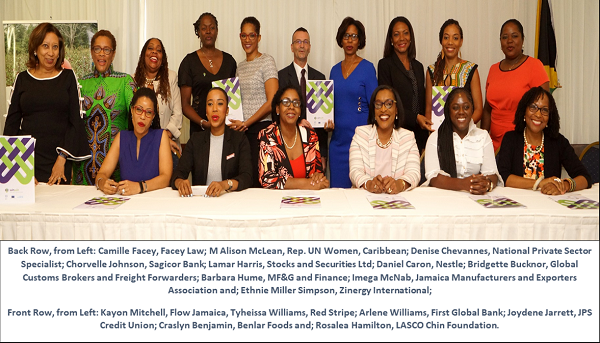