UN Women MCO Caribbean launches its Status of Women and Men Report: Productive Employment and Decent Work for All 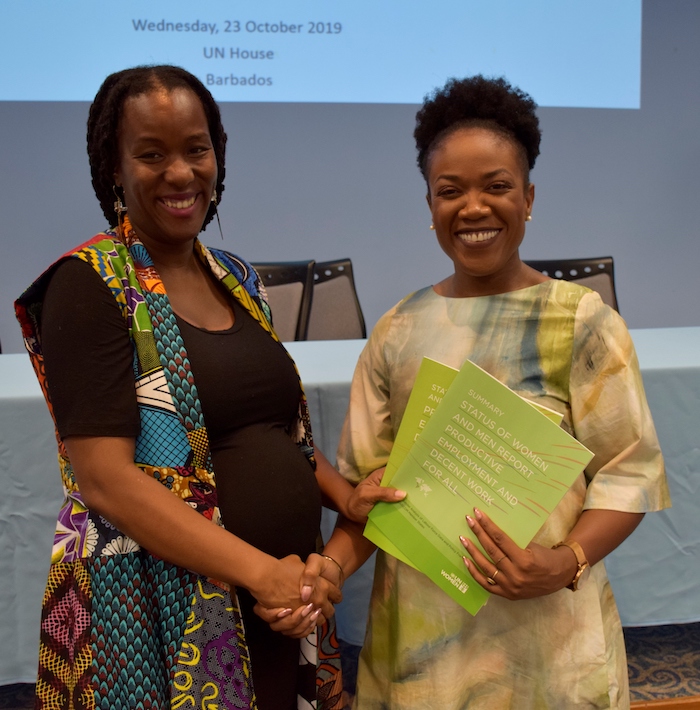 Unpaid care work is one of the main reasons, women remain outside of the labour force and their lower levels of economic activity. Also, despite significant achievements in education, structural barriers to gender equality and women’s empowerment persist in the labour market.

The launch in Barbados chaired by the UN Women MCO Caribbean Deputy Representative Tonni Brodber and under the auspices of the Honourable Marsha Caddle, Minister in the Ministry of Economic Affairs and Investment, also included a detailed presentation of the findings by UN Women Programme Specialist for Economic Empowerment and Statistics, Isiuwa Iyahen, who co-authored the report along with Deborah Budlender, Social Policy Expert and Statistician.

Read the Deputy Representative’s Remarks to the Report Launch >>

For women and men to benefit equitably from economic growth, there must be recognition of their respective vulnerabilities and disparities and robust evidence-based policies put in place to reduce and eradicate the inequalities. This report contributes to these efforts by providing analysis and discussion – from a gender perspective – of the more common labour force indicators, alongside analysis and discussion of some additional indicators.  Most official reports based on analysis of Labour Force Survey (LFS) data is disaggregated by sex. However, the gender differences are not always discussed.

The LFS focuses on “economic” work – that is, work for pay, profit or gain but they do not ask explicitly about unpaid care work. They do not ask about work such as cooking, cleaning and other housework, or caring on an unpaid basis for members of one’s household and community. However, this report highlights some of the ways unpaid care work impacts on women’s and men’s “economic” work.

What this tells us is that Access to education alone will not address the gender inequalities in employment. What is required is multifaceted. These structural challenges that remain can be addressed in large measure through policies to enable women’s equitable participation in the labour force. Measures that will decrease unpaid care work, such as subsidized childcare, parental leave and flexibility in work arrangements.

Despite legislation on equal pay for equal work, gender wage differentials persist in favour of men. The lack of sexual harassment legislation also renders women more vulnerable to exploitation in the workplace, hindering their productivity and employment prospects.

There needs to be the full understanding of the structural barriers to women’s empowerment in order for both women and men to enjoy, de facto, the full range of their rights. When women remain disadvantaged, a society continues to undervalue the full potential of all its people.