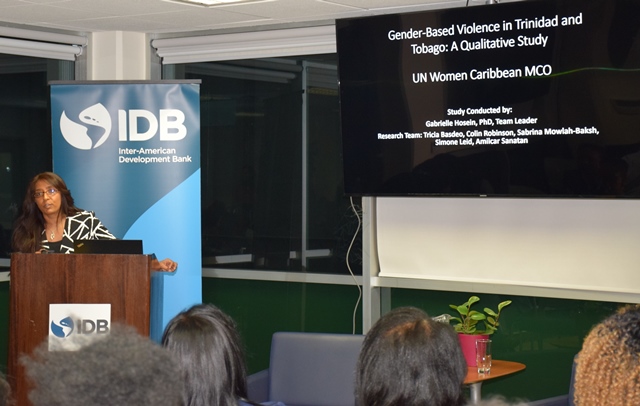 Minister of State in the Office of the Prime Minister with responsibility for Gender and Child Affairs, Ayanna Webster-Roy said this translates to about 130,000 women, way too high for a country of 1.3 million. The results in keeping with the WHO global findings, were revealed at the launch of the first prevalence survey on GBV for Trinidad and Tobago.

UN Women funded a companion qualitative survey which complemented the national quantitative survey funded by the IDB. The data confirms the sobering fact that VAW is widespread and underscores the urgent need for adoption and implementation of meaningful laws, policies and programmes geared at prevention of and protection from VAW. This includesmoving women out of situations of violence through support of safe housing for them and their children and the means to be financially independent.

It is also necessary to address toxic elements associated with masculinity which wrongfully dictate that men have power and control over women’s lives and often lead to violence against women. There was a highly significant relationship between a male partner’s controlling behaviours and women’s experience of emotional physical and sexual partner violence. Women whose partners exhibited multiple controlling behaviours such as restricting a woman’s freedom of movement or access to health care were at least twice as likely to experience at least 1 dimension of IPV.

Related News
22/04/2022
The Spotlight Initiative Donates Critical ICT Equipment to the Victim and Witness Support Unit of the TTPS
15/03/2022
From where I stand: "Of course, we had no money, but the problem was big enough for us to tackle even without financial resources."
26/11/2021
All Young Women Leaders Parliamentary Sitting Debates Protection Against Sexual Harassment in the Workplace Act
16/11/2021
UN Women Small Grant Advertisement under the Spotlight Initiative Trinidad and Tobago
19/10/2021
Innovative strategies and partnerships urgently needed to arrest women’s economic slide as a result of COVID-19
END_OF_DOCUMENT_TOKEN_TO_BE_REPLACED