The Fastest Man in the World is HeForShe 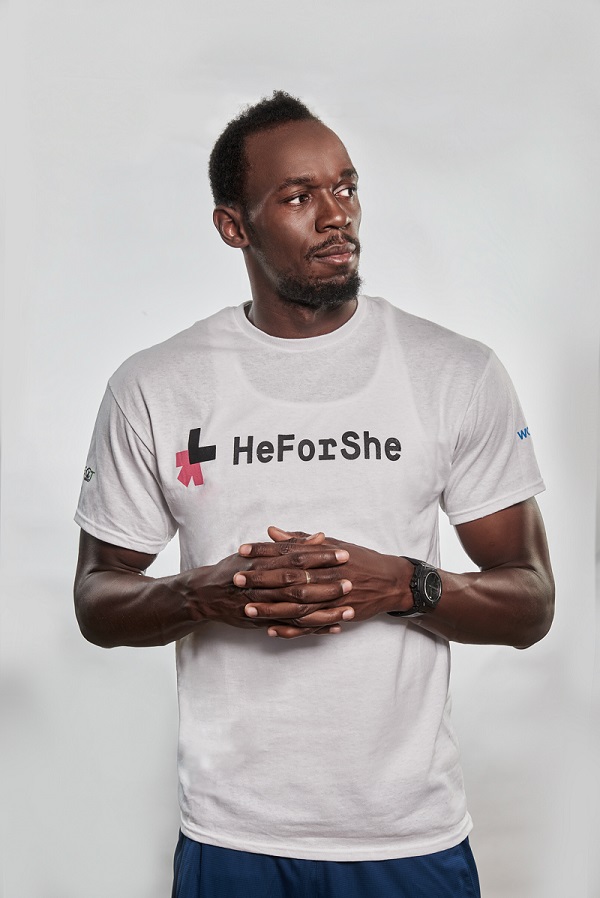 Usain Bolt an icon for track and field athletics who has established himself as the greatest sprinter of all-time, brings to the forefront of his global audience, the issue of gender equality and ending violence against women and girls.

The national launch of the HeForShe Campaign in Jamaica is a collaborative event with partners, the United States Embassy to Jamaica, Respect Jamaica, UN Women Multi Country Office – Caribbean, Digicel Foundation, the High Commission of Canada, the British High Commission and the EU Delegation to Jamaica.

Minister of Culture, Gender, Entertainment and Sport, the Honourable Olivia Grange commended the partnership between the U.S. Embassy in Jamaica, UN Women and her Ministry for the initiative.

“This campaign is an initiative which intends to reframe gender equality, from that of a women’s issue, to an issue which requires the full participation of both women and men. I believe that this approach is beneficial to all of society – socially, politically and economically,” Minister Grange said.

Representative for the UN Women Multi-Country Office in the Caribbean, Christine Arab said the active participation of strong partners is central to the success of the campaign: “Given the crucial role of men and boys as advocates and agents of change, HeForShe provides a platform for men to self-identify with issues of gender equality and its benefits, which liberate not only women, but also men, from prescribed social roles and gender stereotypes. We congratulate Jamaica on an impressive list of HeForShe Champions representing the voices of the nation and with the ability to reach to all corners of the island”, Ms. Arab added.

“The United States Embassy in Kingston is proud to announce its support for the campaign”, said US Ambassador Luis G. Moreno. He urged all Jamaicans and those who support Jamaica to take the HeForShe Pledge and “stand together to create a bold, visible force for gender equality”.

Canadian High Commissioner Sylvain Fabi is thrilled with the campaign. He noted “Our Prime Minister has made it very clear that in this day and age women must be treated as equals. Research demonstrates the critical role woman play and the positive impact they have on development, the economy and the family.  It is imperative that everyone, women and men, support the goal of equality.”

"The UK is committed to eliminating discrimination, poverty and violence against the women of the world,” said British High Commissioner David Fitton. “In Jamaica, our High Commission has supported several initiatives aimed at building the capacity of the government and civil society to tackle issues surrounding women’s rights. Our hope is that this campaign can further help to increase the power of girls and women to control the decisions that affect them."

"We promote gender equality and women's empowerment as a constant EU priority," José Luis Martínez Chargé d'Affaires of the European Union Delegation in Jamaica, said.  "We are delighted to be part of this effort to raise awareness about violence against women and girls and encourage all Jamaicans to be part of the change."

In 2014 UN Women’s Executive Director Phumzile Mlambo-Ngcuka launched the HeforShe Campaign. HeForShe is a solidarity movement for gender equality developed by UN Women. HeForShe calls on men and boys to work together with women and girls to end gender based discrimination, and within that, the most egregious violation – gender based violence. Through aligning with the HeForShe campaign men and boys will signal their commitment to working to realise gender equality in their homes, schools, workplace, communities, places of worship and fields of play, ultimately in all of their social spaces.

Over 1.3 million people globally have committed to HeForShe. Usain Bolt’s commitment and the leading HeForShe ambassadors’ participation is a lead up to the official launch of the campaign at month end. Please go onto our website – www.heforshe.org  – and show your commitment by pressing “click” and illustrating Jamaica on the world.