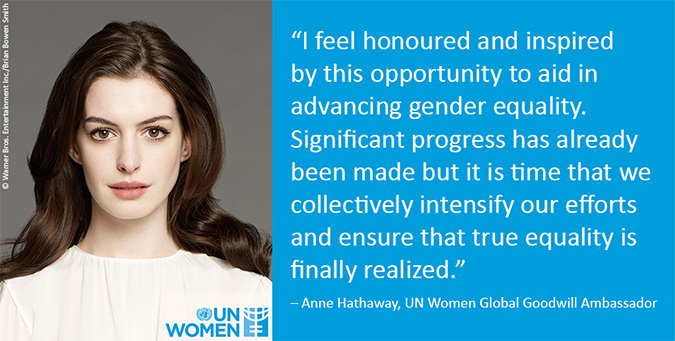 UN Women today announced the appointment of American award-winning actor Anne Hathaway as global Goodwill Ambassador. A long-standing supporter of women’s and girls’ rights, Ms. Hathaway will put the spotlight on the issue of the unequal burden of care work in the home as one of the key barriers to gender equality, working internationally to advance the adoption and implementation of policies that will bring measurable change. These include affordable childcare services and shared parental leave at both government and corporate levels.

“The appointment of Anne is timely because this year UN Women is driving hard to foster more positive mindsets and practical arrangements around workplaces that build and support equality for women,” stated Phumzile Mlambo-Ngcuka, UN Under-Secretary-General and UN Women Executive Director. “The ‘motherhood penalty’—which means that when they become mothers, women’s pay and opportunities at work suffer—is a particularly insidious demonstration of gender inequality in the workplace. For too long it has been difficult or impossible to view raising a child as being truly an equal responsibility for both parents.

“Stereotypes that make it hard for fathers to take time away from work to care for a child are outdated leftovers from the ‘male breadwinner’ model and have no place in today’s mixed workforce. Well-implemented parental leave is just one way for employers to demonstrate that they understand the value of their staff—both male and female,” added Ms. Mlambo-Ngcuka. “To make the case for how this will increase opportunities for women we needed an advocate who had the intellect and passion to tackle this complex issue. Within moments of meeting Anne I realized that we had found our woman. We are truly honoured to have her onboard.”

Childcare services and parental leave are two ways for employers and governments to demonstrate that they understand the value of their people. Just as they hinder women’s equal participation in the workforce, rigid gender roles keep men stuck in harmful cultural stasis. Consumed by a culture of overwork that penalizes them for taking time off for family-care responsibilities, men too face dire consequences from our failure to value care. Failing to involve men in the conversation about care as a core component of gender equality only calcifies harmfully rigid social norms about gender overall.

When it comes to equality, Ms. Hathaway is a committed voice for change. She previously served as an advocate for Nike Foundation and travelled to Kenya and Ethiopia to raise awareness on child marriage. In 2013, Ms. Hathaway provided the narration on ‘Girl Rising,’ a CNN documentary film, which focused on the power of female education as it followed seven girls around the world who sought to overcome obstacles and follow their dreams.

“I feel honoured and inspired by this opportunity to aid in advancing gender equality. Significant progress has already been made but it is time that we collectively intensify our efforts and ensure that true equality is finally realized,” said Ms. Hathaway.

Women’s economic empowerment is one of UN Women’s core strategic pillars, and a priority focus under Ms. Mlambo-Ngcuka’s leadership.

Related News
13/07/2021
Press release: UN Women presents ‘A Force for Change’, an art exhibition and auction featuring work by 26 Black women artists, benefitting Black women
09/02/2016
Agenda 2030 is anything but business as usual – Executive Director
12/11/2022
Rallying Call from Caribbean at COP 27 for Reset of Climate Finance with a Gender Lens focus
28/06/2022
IICA and UN Women team up to support marginalised farmers and agriMSEs
27/06/2022
United Nations and The Government of Bermuda launch project to spur economic activity for those left fartherest behind by COVID-19
END_OF_DOCUMENT_TOKEN_TO_BE_REPLACED