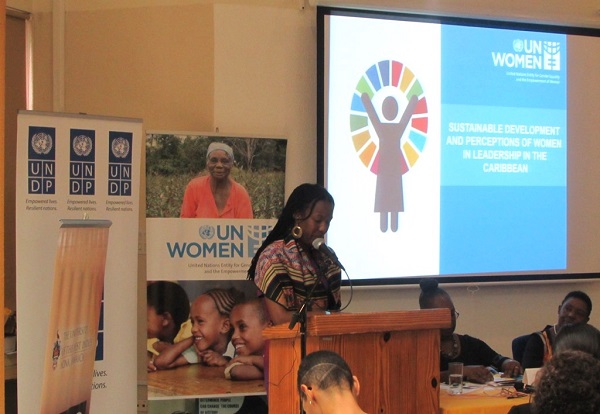 MCO Caribbean: Since women make up roughly half of the population, it is both fair and just that by this same proportion they should participate in leadership and national decision making both in elected and appointed posts. Studies show that more women in politics has resulted in a shift in policy priorities, with greater emphasis emerging around issues of employment rights, social protection, the eradication of domestic violence, education and health. Recent research commissioned by UN Women MCO Caribbean shows too, that the region feels it is time more women occupied leadership roles.

As CARICOM Governments plan a response to the Zika virus, women’s leadership will play an important role in the design of these public health strategies. Women are at the quiet frontline for care of the sick, and the essential primary network for distribution of information about how to avoid ill-health and what to do in case of infection.

On this International Women’s Day and one week before the start of the 60th Commission on the Status of Women, which will focus on implementation of the SDGs, the SDGs and Agenda 2030 for Sustainable Development established the centrality of Gender Equality and Women’s Empowerment (GEWE) and the imperative to ‘leave no one behind’. Women and girls can play a vital leadership role in promoting community participation and must be sought out as active partners in community development and national growth, including in the fight against Zika.

As public health response strategies are developed, they must have human rights, and women’s rights at their core - including their sexual and reproductive health rights. Alongside our partners in the United Nations, UN Women is deeply concerned by the spread of the virus in Latin America and the Caribbean, the high rates of unintended teenage pregnancies in the Region, and the consequent increased vulnerability of women and girls.

IT IS TIME For More Women in POLITICS AND POLITICAL LEADERSHIP

In a recent UN Women commissioned survey on the perception of women and leadership in the Caribbean, most respondents including those aged 18-30 years old, felt that more women are needed in politics even more strongly than the older groups interviewed. Most people also thought that both men and women were equally suited to political leadership. Men slightly less so than women.

UN Women MCO Caribbean commissioned CADRES to conduct the survey which was carried out in Barbados, Guyana, Jamaica and St. Lucia.  Surveys were administered based on a random selection normally associated with Polling Divisions (PDs) in each Constituency in every one of the four countries, to ensure a representative geographical coverage.

Our research illustrate people’s perception around women in leadership, and indicates the areas in which government and civil society could work to promote women’s leadership.

Research further shows that the support for greater numbers of women in political leadership and national decision-making stems from an understanding that equal participation is a basic human right and essential to sustainable development.

The new 2030 Agenda’s Sustainable Development Goals include a specific goal – Goal 5 - to achieve gender equality, which aims to end discrimination and violence against women and girls and ensure equal participation and opportunities in all spheres of life.

In conjunction with the adoption of the 2030 Agenda, more than 90 governments worldwide, including the Government of Guyana have declared their commitments in response to UN Women’s call for action to “Step It Up for Gender Equality”. Heads of State and Government have pledged concrete and measurable actions to crack some of the fundamental barriers to the achievement of gender equality in their countries.

UN Women is calling on Governments in the Caribbean and globally to “Step It Up for Gender Equality”.
Related News
07/12/2022
Women parliamentarians of Jamaica commit to collaborative actions to promote gender equality in legislative work
21/10/2022
Supported by OHCHR and UN Women, Bahamian government officials and CSOs benefit from training on Human Rights Treaty Reporting
22/09/2022
UN Women MCO Caribbean TRIBUTE TO HAZEL BROWN
25/04/2022
Strengthening women's role in politics is key to solving today's crises
28/03/2022
From where I stand: “Gender bias still exists in public life, but it doesn't need to be a hindrance to any ambition women may have.”
END_OF_DOCUMENT_TOKEN_TO_BE_REPLACED