Ministers, officials and authorities of national women’s machineries from Latin America and the Caribbean met from 26–28 January in Santiago, Chile, calling for full implementation of the commitments to gender equality and the empowerment of women within the Sustainable Development Goals (SDGs). The consultations were held in preparation for the 60th session of the Commission on the Status of Women (CSW60), set to take place in New York from 14-24 March. 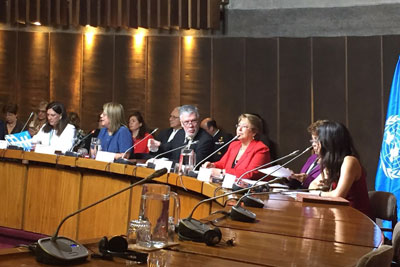 In order to achieve equality and sustainable development, officials underscored that women must have a role in all decision-making spheres, and that their sexual and reproductive rights must also be protected. During the meeting, ministers also committed to increasing the power, financing and capacity of national women’s machineries as well as gender equality responsibilities within different branches and levels of government throughout the region so that they can effectively carry out their duties, in line with Agenda 2030.

They agreed on a declaration, to be presented as a regional position of the governments of Latin America and Caribbean at CSW60. It highlights the need to fully implement SDG5, on “achieving gender equality and empowering all women and girls,” as well as gender-related targets in all the SDGs. The declaration reaffirms the governments’ commitments to specifically address the diverse needs of women and girls, especially more marginalized and vulnerable groups, so that no woman is left behind.

With an emphasis on UN Women, several Member States noted the need to ensure sufficient financial and human resources for all UN agencies, funds and programmes that are focused on promoting gender equality.

Two days earlier, the first Joint Meeting of UN Women Civil Society Advisory Groups from the region took place on 24-25 January. Over 40 representatives of civil society, women’s networks and organizations from gathered in Santiago to identify regional challenges to ensuring women’s rights and empowerment, particularly since the adoption and implementation of the SDG framework and Agenda 2030. At the end of the meeting, participants adopted a position document, which includes recommendations on the session’s main themes: 1) women’s political empowerment; 2) women’s economic empowerment; 3) elimination of violence against women and girls; and 4) health. The document also focused on ensuring full and active participation of civil society at CSW.