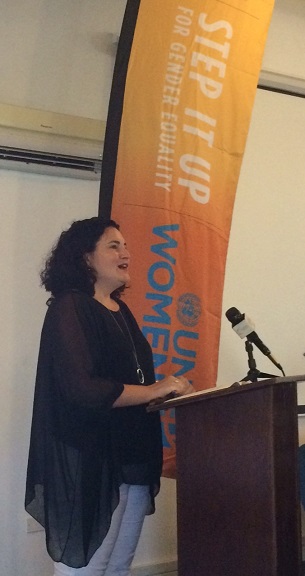 Christine Arab UN Women Representative MCO Caribbean. Photo: UN Women/Tonni Brodber
As we get set to embrace a new global development roadmap, what will this mean for the Caribbean? What must our priorities be and how will we make them known to ensure that the Caribbean needs are given high visibility and programmed for action and finance?

Effective and real development can only be achieved where all members of society have the opportunity without restrictions – legislative or cultural - to realise their full potential. Holding back half of the region’s population by not recognising women’s equal value, contribution and rights, hurts not only women, but also men. Gender inequality is not a women’s issue but an issue that affects everyone. It is only through a real and lived equality for women and men, that communities and nations can thrive.

The new global development roadmap, will be shaped by the Sustainable Development Goals (SDGs) which are to be agreed to at the September 2015 High Level United Nations General Assembly. The Caribbean has the opportunity to localise the SDGs by prioritising those of the proposed seventeen goals which would be the most relevant to the Caribbean context, and which ensure a real and lived gender equality. ECLAC, with support from the UN System, has been supporting CARICOM in this process throughout the region.

Seventeen (17) SDGs have been identified by the UN Member States.  Goal 5 is specific to gender equality and women’s empowerment, however ensuring a real and lived equality is felt by both women and men is critical to the achievement of all 17 goals in order to achieve sustainable development. Caribbean women and men must work together to build vibrant economies, and enhance inclusive justice and governance systems.

Keys to identifying and advocating for Caribbean priorities around the SDGs lie in building on existing commitments to gender equality, such as those contained in the Convention on the Elimination of all forms of Discrimination Against Women (CEDAW), the Beijing Platform for Action (BPfA), the International Conference on Population and Development (ICPD) Programme of Action and Convention on the Rights of the Child (CRC) as well as to draw on the lessons learnt from the 20-year review of the implementation of the BPfA.

"Planet 50-50 by 2030: Step It Up for Gender Equality" (Step it Up) the UN Women call to action, asks governments to make national commitments to address the challenges that are holding women and girls back from reaching their full potential.

To this end a meeting is being convened of CARICOM Ministers responsible for gender equality, Women parliamentarians, senators and key political stakeholders, the youth and civil society representatives whereby regional leaders at all levels will, Step it Up as Champions for Gender Equality. Fifty young people from Antigua and Barbuda, as well as additional youth from the UNFPA regional community of Youth Advocacy Groups will be brought together virtually in a forum to discuss opportunities for youth involvement in advocacy and leadership on substantive equality in sustainable development.

Ministers with responsibility for gender affairs and parliamentarians from across the region will be able to share best practices and strengthen their expertise on how to promote and highlight the need for a real and lived gender equality as a political priority in their constituencies, parliament and at regional and international levels.

Related News
31/08/2015
Changing the world through our participation: Caribbean overview of the Sustainable Development Goals
15/05/2022
Call for Proposals for Responsible Parties - CSOs
30/03/2022
UN & Government of Jamaica Launch New Effort to Mitigate COVID-19 Impact
28/03/2022
From where I stand: “Gender bias still exists in public life, but it doesn't need to be a hindrance to any ambition women may have.”
30/09/2021
UN Secretary General to open UNCTAD ministerial conference in Barbados
END_OF_DOCUMENT_TOKEN_TO_BE_REPLACED