“Progress of the World’s Women 2015-2016: Transforming Economies, Realizing Rights” offers an economic perspective to include women for the benefit of all societies. 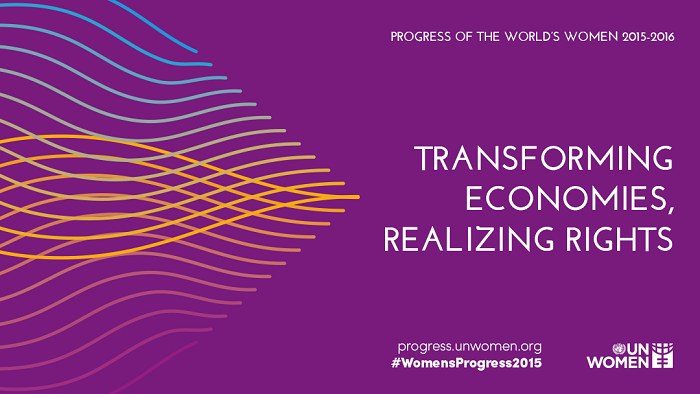 At the same time however it demonstrates that the transformation of economies to ensure that women's rights become a reality, is possible by constructing economic and human rights policies that promote far-reaching changes.

Progress sets out a vision of a global economy fit for women, where they have equal access to productive resources and social protection, which provides them with sufficient income to support an adequate standard of living. In such an economy, the work that women do would be respected and valued; stereotypes about what women and men can and should do would be eliminated; and women would be able to work and live their lives free from violence and sexual harassment.

However, the data and analysis presented show that this vision is still far from reality. Globally, only half of all women in the world are part of the labour force, compared to three-quarters of all men. The participation of women in the Latin America and the Caribbean labour market experienced the largest increase compared to all global regions - from 40 to 54 percent between 1990 and 2013; but it is still far below the participation of men (80%).

The UN Women report also highlights the persistent gaps in the salaries of men and women: worldwide, women earn on average 24 percent less than men; in Latin America and the Caribbean this figure is 19 percent.

Additionally, in the region, 59 percent of women’s jobs are located in the informal sector without labour legislation and social protection.  Paid domestic work, which is usually informal and not protected by labour laws, accounts for 17 out of every 100 economically active Latin American and Caribbean women. While Guyana is the only Caribbean country to have ratified the ILO Convention 189 on Decent Work, the UN Women report also notes that Trinidad and Tobago and Chile are among the countries that have recently extended national minimum wages to domestic workers who are often informally employed.

Women still carry the burden of unpaid care work in the home. In those countries in the region with time use surveys, it is evident that women perform two to five times more unpaid domestic and care work than men, which limits their educational and employment opportunities, and leaves them less time for rest, leisure or political participation.

While there is evidence according to a recent ILO report of Caribbean women in seven countries holding above 40% of management positions, it is noted that these positions are largely concentrated in areas such as human resources, communications and administration. The UN Women report probes women economic progress encouraging countries to better understand the challenges and opportunities that women face in attaining their full economic potential. One significant challenge in the Caribbean is lack of data on these issues. UN Women MCO Caribbean is working to support countries to address their data gaps on gender disparities to more efficiently measure progress on women’s economic empowerment and programme effectively to build on women’s economic potential.

“Our public resources are not flowing in the directions where they are most needed: for example, to provide safe water and sanitation, quality health care, and decent child- and elderly-care services. Where there are no public services, the deficit is borne by women and girls,” said UN Women Executive Director Phumzile Mlambo-Ngcuka. “This is a care penalty that unfairly punishes women for stepping in when the State does not provide resources and it affects billions of women the world over. We need policies that make it possible for both women and men to care for their loved ones without having to forego their own economic security and independence,” she added.

Through case studies and concrete examples of change, the report introduces 10 key recommendations to move towards an economy that ensures women's empowerment and the exercise of their rights, and that is also beneficial for society as a whole and for the sustainable development of each country.

In the report, UN Women points out that an economy designed with women’s needs in mind would give them an equal voice in economic decision-making: from the way in which time and money are spent in their households, to the ways in which resources are raised and allocated at the national level, to how broader economic parameters are set by global institutions.

“If the economy worked for women, their life choices would not be constrained by gender stereotypes, stigma and violence; women could carry out their work without fear of sexual harassment or violence; and the paid and unpaid work that they do would be respected and valued,” said Luiza Carvalho, Regional Director of UN Women for the Americas and the Caribbean.

“We urgently needed a transformative agenda that allows greater equality and redistribution to build economies that work for women and men equally. Our region is moving forward, but we need to accelerate the pace towards substantive equality”.

“Macroeconomic policies can and should support the realization of women’s rights, by creating dynamic and stable economies, generating decent work and mobilizing sufficient resources to fund vital public services,” continued Carvalho. “Governments must move beyond old metrics of growth such as GDP and low inflation, and instead, they need to quantify the growth in terms of compliance with human rights.”
Related News
12/11/2022
Rallying Call from Caribbean at COP 27 for Reset of Climate Finance with a Gender Lens focus
28/06/2022
IICA and UN Women team up to support marginalised farmers and agriMSEs
27/06/2022
United Nations and The Government of Bermuda launch project to spur economic activity for those left fartherest behind by COVID-19
19/10/2021
Innovative strategies and partnerships urgently needed to arrest women’s economic slide as a result of COVID-19
13/07/2021
Press release: UN Women presents ‘A Force for Change’, an art exhibition and auction featuring work by 26 Black women artists, benefitting Black women
END_OF_DOCUMENT_TOKEN_TO_BE_REPLACED