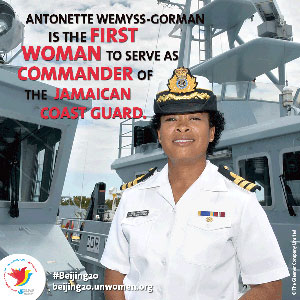 She was brought up by a single mother in rural Jamaica, in a family of modest means. Today she is the Commanding Officer of Jamaica’s Coast Guard, the first woman to attain the prestigious position in the island state, as well as the entire Caribbean region. Commander Antonette Wemyss-Gorman learnt early in life never to accept ‘no’ for an answer. Her mantra: “I can do that!”

“My grandparents and my mother made me believe I could be anything I wanted to be. When I was growing up, I felt I was the centre of the world because of the inspiration I got. I was socialized to think that I could do whatever I wanted to do, and that is how I have grown up and approached everything,” she says.

Growing up in the rural parish of Manchester, Jamaica, Commander Wemyss-Gorman says there was very little interaction with the military. Having moved to the city capital of Kingston to pursue undergraduate studies at the University of the West Indies Mona campus, a chance encounter with a retired defence officer encouraged her to consider applying for a post as an officer. “Once the idea came to me and I thought about it and I read up about the Jamaica Defence Force, in my mind, this was it. I was going to do it, there was no failing, and it was going to happen.”  That year, Antonette Wemyss-Gorman was one of two people who passed the JDF selection board from among 34 applicants.https://beijing20.unwomen.org/en/news-and-events/stories/2014/7/woa-jamaica-antonette-wemyss-gorman