EMPOWERING YOUNG WOMEN TO KNOW  AND CLAIM THEIR HUMAN RIGHTS 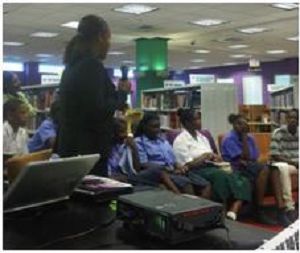 Adana Leggerton, YWCA POS Board Member
The YWCA of Trinidad and Tobago with the support of the UN Women, hosted "Teen Talk - Perspectives on Gender Based Violence" on March 09, 2012.

The initiative, held in observance of the 101st Anniversary of International Women's Day (IWD), was aimed at encouraging youth and in particular young women to claim their rights and take a stand against gender based violence.

The interactive session attended by thirty (30) secondary school students and held at the Young Adults Library of the National Library and Information System (NALIS), Port of Spain, Trinidad was facilitated by the Adana Leggerton of the YWCA Port of Spain Local Association.

The promotional T Shirts produced with the support of UN Women for this event bore the theme "I Know and Claim My Human Rights", which is also the focus of the YWCA of Trinidad and Tobago's programming efforts in 2012.