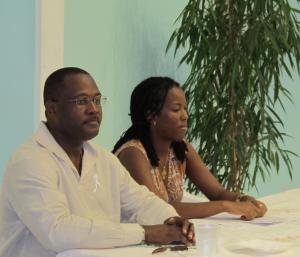 It is my pleasure to give these remarks on behalf of UNIFEM (part of UN Women), at this White Ribbon Campaign (WRC) event. Through the campaign Barbadian men and women are joining the largest effort in the world of men working to end violence against women (VAW).

Too often when the focus is on physical violence against women, the immediate response is what about women who beat men or male on male violence. It is not a competition or a tit for tat; the ways in which both sexes are affected by violence are different and equally valid. 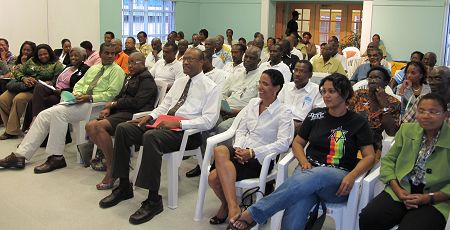 The statistics show that the perpetrators of sexual violence and physical and economic violence in intimate relationships are usually men. To acknowledge this does not negate the men who are affected by violence in relationships but it should incite a movement to use all the tools we can to reverse this trend of violence, to make our region safer for women and girls. To do this, we need to drill down and really confront what lies at the root of violence in the region and really the world. This could perhaps lead us to understanding why often women are the most vulnerable.

Often in this work we bandy about many concepts and terms. One day we speak of violence against women and the other we speak of gender based violence. Gender based violence being violence driven by gender stereotypes. One such stereotype being that men are powerful, must seek power at all and any costs. Usually this power is defined narrowly as the power over others. It often follows that one must attack when this power is threatened in any way, whether it is by another man young or old, or your wife or girlfriend not having your dinner on the table on time or perhaps making more money than you. Violence against women is one form of gender based violence. Violence between men is arguably another form. The narrow form of masculinity espoused by international, regional and national media is suffocating our region.

UNIFEM has long worked in the field of masculinities. The Working Group on Masculinities, Gender Equality and Social Policy was formed in 2008 and has worked with men in areas such as violence as well as HIV. The working group includes representatives from UN agencies, academia and the newly re-established CariMAN (Caribbean Male Action Network) Initiative. The key to the success of the group is that it is guided by principles of gender equality as means to empowering men.

This focus has led to the creation of a "Champions for Change" network of men advocates to end violence against women. From Guyana across the island chain and back to the continent in Belize, men in this region are advocating for an end to violence against women, dismantling gender stereotypes and creating space for more positive expressions of masculinity.

Additionally over the past 5 years UNIFEM has coordinated the Partnership for Peace: a Violence Prevention Programme. Domestic Violence legislation generally makes provision for counselling of perpetrators of domestic violence. Working with an Expert Group of psychologists, lawyers, social workers and human rights advocates, the Partnership for Peace: a standardised court-based Violence Intervention Programme, has been developed.

This programme teaches principles of perpetrator accountability and women's human rights.  In partnership with the Grenada Legal Aid and Counseling Clinic and with national partners from the government, the judiciary and NGOs, the programme has been introduced to Belize, British Virgin Islands, Grenada, St. Lucia, Trinidad & Tobago and Jamaica. Through the programme, men are led to confront negative gender stereotypes of masculinity and the unequal gender power relations that violence expresses and reinforces. The programme advances men's responsibility for ending violence against women, not only individually but collectively. UNIFEM is in the process of fully launching the programme in Barbados.

Men and women must work together to reject harmful gender stereotypes that are eating away at the fabric of our society. In order to transform our communities and create a sustainable culture of peace, boys and men (and women who also sometimes buy into more aggressive forms of masculinity) need to be convinced there is power in loving, caring, excelling at school, peace&until the media, pop artistes, schools and our places of worship laud these expressions of power and support positive and varied expressions of masculinity, we will remain trapped in a cycle of violence.

UNIFEM also worked with artistes to UNiTE to end violence against women. Artistes from Destra in Trinidad and Tobago to Masud Sadiki in St Kitts pledged to do what they could through their music to support an end to violence.

Bishop Desmond Tutu rightfully warned that "The society that permits violence against women is a society that is on the way out." It is absolutely unacceptable that this space - beautiful, creative and innovative - the Caribbean, should be so insecure for women and so violent in general. This gathering in Barbados is one of the many steps, Caribbean society is taking and needs to continue to take, in the right direction to end violence against women.