United Nations launches $29 million appeal for St. Vincent and the Grenadines and other affected countries as volcano eruption continues 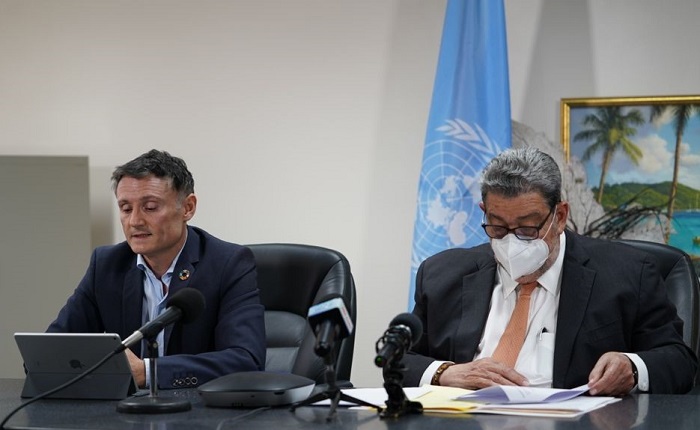 The eruptions of the La Soufrière volcano which began on 9 April is expected to displace close to 20,000 persons with over 12,700 evacuees now registered in public shelters and in private homes. Entire villages have been covered in ashes, buildings damaged , schools and businesses closed , crops and livestock destroyed, and residents left with limited access to clean drinking water. Further eruptions are expected in the coming weeks.

Funding raised through the UN Global Funding Appeal for the La Soufrière Volcano Response Saint Vincent and the Grenadines and Affected Countries ,will provide immediate lifesaving humanitarian aid including cash assistance and clean water, and support a sustainable recovery, including through repairs to homes and support for livelihoods. The UN and partners will also assess the economic, social, and environmental impact on countries affected by the volcano, supporting with ash removal and improving environmental health conditions. Another priority is to continue preventing the spread of COVID-19 as part of the shelter management work and all humanitarian and recovery efforts.

The appeal will be directed towards two main pillars: Humanitarian response - Provision of time-sensitive and lifesaving humanitarian interventions and Recovery and rehabilitation.  Interventions are divided amongst eight sectors being: Protection; Health; Education; WASH; Shelter and Housing; Cleanup of ashes, equipment, and environmental health; Food Security and Livelihoods; Agriculture; and Logistics.

A call to action was made for international solidarity to provide a lifeline to the most vulnerable people in Saint Vincent, as well as in neighbouring affected countries, during today’s virtual launch in Saint Vincent by UN Resident Coordintor Didier Trebucq, alongside Prime Minister Ralph Gonsalves, Regis Chapman, Head of Caribbean Sub-regional Office for WFP and Aloys Kamuragiye, Representative  of UNICEF Barbados and Eastern Caribbean. Affected countries include  Antigua and Barbuda, Barbados, Grenada, and Saint Lucia, some of whom have been adversely  impacted by severe ashfall, and all of whom have offered to shelter evacuees.

“The level of destruction that has befallen this beautiful country and the widespread disruption caused by this event, will forever be etched in my mind. The devastating impact of this event on thousands of people is undeniable,” said UN Resident Coordinator Didier Trebucq. “The UN will be a steadfast partner, working with the Government and people of Saint Vincent and the Grenadines to ensure strong and resilient recovery. This Global Fund appeal will mobilize international solidarity to enhance our efforts. ”

Prime Minister Gonsalves painted a poignant picture of the  desolation and the wasteland of his beloved country describing the uncertainty as very troubling. He said: “Without effective cooperation from the UN and our regional partners our life and living will be wholly unbearable. “The United Nations and its agencies have come splendidly to the assistance of St. Vincent and the Grenadines at the midnight hour of our need.  Their interface with the national authorities and regional organisations such as CDEMA has been exemplary.”

Also lending support to the appeal was Executive Director of  the Caribbean Disaster Emergency Management Agency(CDEMA) , Elizabeth Riley , who stated: “Today’s launch is about people, mothers, father, children who are impacted. It is also about the people working to support those people , and about partnership and the possibilities for a more resilient future for Saint Vincent and the Grenadines.””

Director General of the OECS Commission Dr. Didacus Jules also lent his support noting: “Saint Vincent is at the epicentre of  catastrophe. It stands battered but not broken and embraced by concentric circles of love as evident in today’s appeal.”

This crisis comes as Saint Vincent and the Grenadines is recovering from its largest COVID-19 surge amid the pandemic, the region’s worst Dengue outbreak in recent history, and ahead of the 2021 hurricane season.

The UN Global Fund Appeal launch was followed by a  virtual press encounter with  UN correspondents and the Resident Coordinator and Prime Minister Gonsalves, moderated by the UN Secretary-General’s Spokesperson Stephane Dujarric live on http://webtv.un.org/

Related News
31/03/2022
From where I stand: “The work to end violence against women and girls in the Caribbean is an immense challenge. It takes partnership, a love for people and a want for positive change.”
06/09/2021
INVITATION TO APPLY: UN Women Caribbean Regional Spotlight Initiative Small Grants
06/09/2021
Call for Proposal for Responsible Parties
24/11/2017
Orange the World in support of the 16 Days of Activism against Gender-Based Violence
04/02/2023
CFP for Grenada Spotlight Initiative to End Violence (2023-05)
END_OF_DOCUMENT_TOKEN_TO_BE_REPLACED