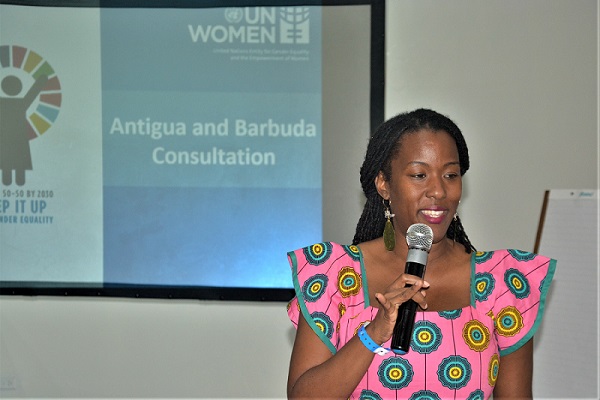 St John’s, Antigua and Barbuda: The first of 15 national consultations on a draft Regional Gender Equality Strategy for CARICOM and the Beijing Platform for Action was recently held in St. John’s Antigua in the Eastern Caribbean; thanks to the ongoing partnership of UN Women and CARICOM.

Some 50 stakeholders representing government, non-government organisations, civil society groups, the private sector, and faith-based organisations were reviewing the strategy as it relates to a situation analysis of gender equality, equity and the empowerment of women and girls in Antigua and Barbuda. In addition, they explored the gaps and what were some of the quick wins that could be harnessed to continue to achieve progress in the six priority areas of the strategy namely; equality and social inclusion, freedom from violence, access to health services, access to education, good governance and economic empowerment.

UN Women Deputy Representative Tonni Brodber noted: “It’s our pleasure to collaborate with CARICOM on this process of making explicit how countries will ensure no one is left behind in achieving the SDGs and the 2030 agenda”.

According to Ann-Marie Williams, Deputy Programme Manager for Gender and Development at the CARICOM Secretariat; who is leading on the consultations; it is also expected that during the sessions, participants will better understand the gains made in gender equality and equity since the Beijing Declaration in 1995, while identifying what needs to be done in order to fast track progress.

Ms. Williams emphasised that the strategy has been crafted using a rights-based approach that takes into consideration the plight of vulnerable groups particularly the disabled and indigenous peoples. She also outlined that the Strategy’s goal is to accelerate the effective implementation of priority actions through a regional coordinated approach to achieve gender equality, equity and the empowerment of women and girls in tandem with goal 5 of the United Nations Sustainable Development Goals (SDGs).

Goal 5 speaks to the empowerment of all women and girls and is the driver of all the other 16 SDGs.

She added further that the strategy is also aligned with the Convention on the Elimination of All Forms of Discrimination Against Women (CEDAW), the Samoa Pathway, the Montevideo Consensus Strategy and other regional and international frameworks on the advancement of Gender and Development that CARICOM Member States have ratified.

As part of the member states consultations, key informant interviews will also be conducted in some of the countries. The purpose of those interviews is to find out how key informants can assist with advancing gender equality in those countries.

The consultations are expected to span the next few months with engagements confirmed in Guyana and St Vincent on March 6 and 7th, as well as Saint Lucia, Grenada and Belize in April. It is expected that by the end all 15 CARICOM Member States will provide their input on the strategy after which it will be reviewed, and the necessary amendments made for a final document to be produced.