CDB and UN Agencies partnering to achieve SDGs in the Caribbean 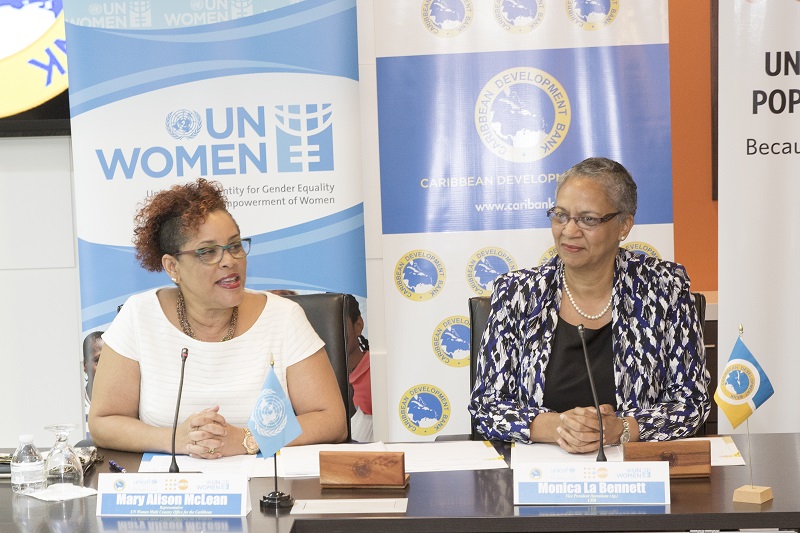 Bridgetown, Barbados: - Partnerships are at the foundation of UN Women’s work on the ground in the Caribbean and are the main vehicle through which UN Women is able to realise a multiplier effect for expanded and improved results for all women and men, girls and boys.

In view of this, UN Women was among three UN agencies – UNICEF and UNFPA - signing cooperation agreements with the Caribbean Development Bank (CDB) that facilitate the CDB utilising expertise from the agencies in the execution of specific projects, which the Bank is funding, so that the most effective outcomes for the Bank’s 19 Borrowing Member Countries are achieved. The signing took place at CDB’s headquarters. 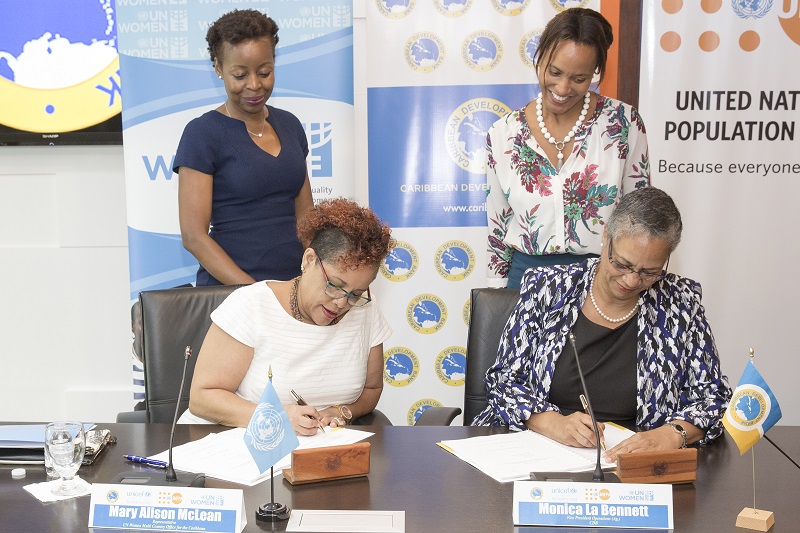 CDB Photo: UN Women MCO Caribbean Representative Alison McLean and Acting Vice-President (Operations) at CDB, Monica La Bennett signing the Framework Cooperation Agreement between the two entities.Looking on are UNICEF Legal Affairs Specialist, Maria Mkandawire and S. Nicole Jordan, CDB Deputy General Counsel.
The CDB, UNICEF, UNFPA and UN Women have embarked on this collaborative approach, combining technical expertise and lessons learned over their many years of development work in the Region. In a time of shrinking resources, the agencies are partnering to support the achievement of Sustainable Development Goals (SDGs) in the Caribbean.

Acting Vice-President (Operations) at CDB, Monica La Bennett, who signed on behalf of the Bank said the signing strengthened the ongoing spirit of collaboration between the two development partners.

"The signing of these agreements underscores the value of partnerships in helping Caribbean countries achieve their goals and targets under the 2030 Agenda for Sustainable Development. We welcome this strengthened cooperation between CDB, UNICEF, UNFPA and UN Women and look forward to working together towards the ultimate goal of no poverty," La Bennett said.

Partnering to achieve gender equality and empower women and girls

Making the Sustainable Development Goals work for women and girls is central to achieving the SDGs. The attainment of Gender Equality is both a stand-alone goal – Goal 5 – and a goal that cuts across and has a direct and significant impact on the realisation of the other 16 SDGs.

"Working in development, we understand clearly that while we have individual agency mandates of focus, because each mandate has impact on the other, it is only through collaboration that we can be truly responsive to needs on the ground whilst working towards the realisation of safety and justice, resilience, equity, prosperity and the overarching goal of sustainable development for the Caribbean," said Ms. M. Alison McLean, Representative - UN Women MCO Caribbean.

"The United Nations agencies in the Caribbean are working under the common basis of the Multi-Country Sustainable Development Framework – the MSDF – to ensure coherence and appropriate scale in the design and delivery of programme support. In this time of shrinking resources, we are delighted to expand this cooperative approach to partner with the Caribbean Development Bank – a significant contributor to socio-economic development in the Caribbean, to meet the priority needs of the Governments and people of the Caribbean," Ms. McLean continued. 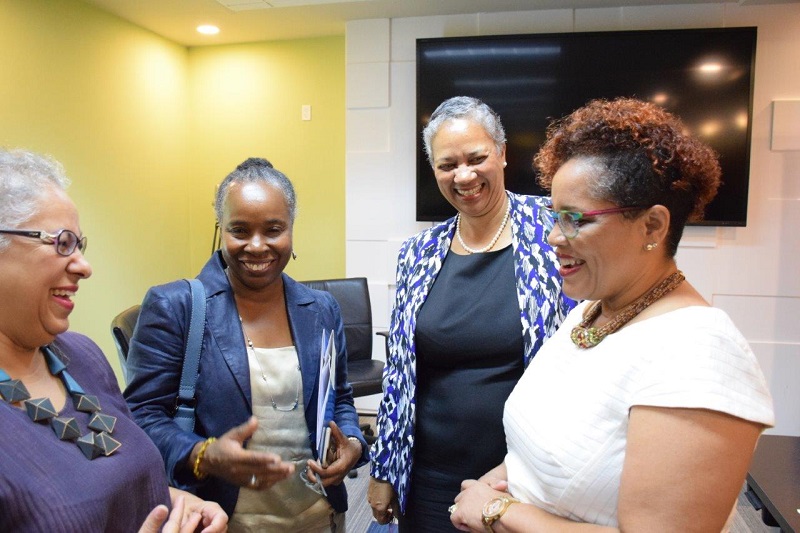 Ms. Fatoumata Ndiaye, UNICEF Deputy Executive Director said: "A strong foundation for partnership has long existed between UNICEF and CDB in the Caribbean.  This Agreement will open the window ever wider so that we strengthen our own sub-regional approach through the strong outreach of CDB’s networks and convening powers."

"The UNICEF Eastern Caribbean Team has long been emphasizing the importance of the relationship and strong partnership with the CDB.  We at headquarters equally recognize that importance. We will go from strength to strength to build an even more beautiful partnership for the children and young people of the Caribbean," she added.

"The signing of this agreement with the Caribbean Development Bank will open opportunities for a wide collaboration efforts towards the systematic reduction of poverty in the Caribbean through social and economic development. UNFPA looks forward to sharing our technical expertise and evidence-based support to ensure that every woman, adolescent and youth in the Caribbean can realize their full potential and contribute to economic and social transformation. UNFPA is committed in contributing to develop capacity in data collection and analysis to help governments track and analyze population trends in areas such as fertility, mortality, migration and ageing," she said.

About the Caribbean Development Bank

The Caribbean Development Bank is a regional financial institution established in 1970 for the purpose of contributing to the harmonious economic growth and development of its Borrowing Member Countries (BMCs). In addition to the 19 BMCs, CDB’s membership includes four regional non-borrowing members – Brazil, Colombia, Mexico and Venezuela and five non-regional, non-borrowing members; i.e., Canada, China, Germany, Italy, and the United Kingdom. CDB’s total assets as at December 31, 2015 are USD2.7 billion (bn). These include USD1.4bn of Ordinary Capital Resources and USD1.3bn of Special Funds. The Bank is rated Aa1 Stable with Moody’s, AA+ Stable with Fitch Ratings and AA+ with Standard and Poor’s. Read more at caribank.org.

Active in more than 190 countries and territories through country programmes and National Committees.
We are UNICEF, the United Nations Children’s Fund.

Delivering a world where every pregnancy is wanted, every childbirth is safe, and every young person’s potential is fulfilled. We are the lead United Nations agency that expands the possibilities for women and young people to lead healthy sexual and reproductive lives.  We are on the ground improving lives in more than 150 countries.

UN Women is the UN organization dedicated to gender equality and the empowerment of women. A global champion for women and girls, UN Women was established to accelerate progress on meeting their needs worldwide.