What would the economy look like if it truly worked for women?

UN Women to co-host a pre-CSW meeting in Panama 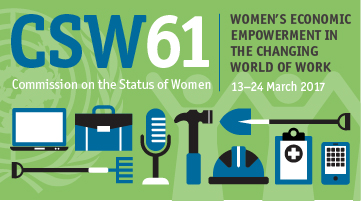 Notwithstanding the progress made in the last decades, women´s participation in the workforce is still 26 per cent lower than men´s in the region, and their unemployment rate is 50 per cent higher. Women earn a regional average of 19 per cent less than their male counterparts [2]. These economic inequalities are even more pronounced for women of colour, young and indigenous women.

The gender pay gap is a universal phenomenon.  Globally, women are paid 24 per cent less than men; and women do nearly two and half times more unpaid care and domestic work than men.

Top gender officials from 25 countries across the Americas and Caribbean region will come together at a pre-CSW Consultation to forge a common position on women´s economic empowerment in the changing world of work, the priority theme for the upcoming 61st session of the Commission on the Status of Women meeting (CSW61) to be held in New York in March.

CSW is the main global intergovernmental body instrumental in promoting women’s rights, documenting the reality of women’s lives throughout the world, and shaping global standards on gender equality and the empowerment of women.

UN Women Deputy Executive Director Lakshmi Puri will attend the Regional Consultations for Latin America and the Caribbean, being held in Panama City, from 6 – 8 February.  The Deputy Executive Director will speak at the opening ceremony of the consultation and contribute to the working sessions. During her visit to Panama, she will also meet the Secretary-General of the Latin American Parliament, the Vice-President of the Republic of Panama and members of civil society from Latin America and the Caribbean.

In preparation for the regional consultations, more than 75 members of women’s organisations and regional networks are also gathering for a meeting on 6 February.

With an indigenous population of close to 10 per cent in Latin America[3], the empowerment of indigenous women, which is the emerging theme of CSW61, is another priority on the agenda of the intergovernmental meeting.

For updates from the region consultations, please follow @onumujeres (Spanish), @un_csw (English) and the hashtag #CSW61 on Twitter.

Related link: Africa to speak in one voice on key issues to boost women’s economic empowerment at CSW61

[3] ECLAC. Current situation of indigenous and afro-american peoples in Latin America and the Caribbean. Available from http://www.cepal.org/cgi-bin/getProd.asp?xml=/prensa/noticias/comunicados/2/132/P132.xml&xsl=/prensa/tpl-i/p6f.xsl&base=/prensa/tpl-i/top-bottom.xsl