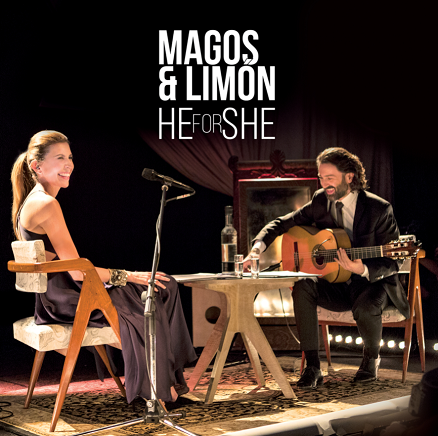 Mexico City, 19th October 2015 — UN Women Mexico and Sony Music Entertainment Mexico announced today, at the United Nations headquarters the release of the CD “Magos & Limón He For She” to promote the values of the campaign, pushed by UN Women, both of which work towards gender equality and the empowerment of women and girls.

The disc is about a collaboration between the United Nations’ Entity of Gender Equality and Women’s Empowerment and Sony Music Mexico, in which, through music, men are invited to join the He For She campaign, a solidarity movement pushed by UN Women that denotes boys and men as advocates and agents of change in the achievement of gender equality and girls’ and women’s rights.

The disc, produced by Sony Music Entertainment Mexico and led by the Mexican artist Magos Herrera, who is also a spokesperson for UN Women Mexico as well as the Spanish guitarist Javier Limón, also involves the participation of recognized musicians and singers such as Eugenia Leon (Mexico), Fito Paez (Argentina), Sachal Vasandani (USA), Chabuco (Colombia), Oran Etkin (New York), Rogerio Boccato (Brasil) and Gregoire Maret (Switzerland), amongst others. Their collaboration for the recording of the disc is based on the idea of supporting the He For She campaign.

The UN Women Mexico representative, Ana Güezmes declared “that if we reach equality, both women and men will benefit at social, political and economic levels. Through this beautiful CD, the organisation wants to transmit this positive image, calling the public to be agents of change in our daily lives, and to act towards the achievement of a 50-50 world, free of discrimination and with full equality between men and women, and what best way of making this a reality than through the friendship between countries, the celebration of our diversity and talent, and through a message of beauty so as to achieve the full participation of women and girls in all spheres of life”.

On the other hand, the President of Sony Music Entertainment Mexico, Roberto Lopez proposed that “alongside UN Women Mexico, we are pleased to announce today this special release. To reiterate, music and artists will be the medium through which the transcendental message that is gender equality and women’s and girls’ empowerment can be expressed, by means of our album “He For She”. I profoundly thank Magos Herrera, Javier Limon and all the musicians involved for their music and compromises in support of this important project, and we invite all men and boys of Ibero-America and around the world to join this solidarity movement”.

The He For She campaign is a solidarity movement to which nearly 500,000 men around the world have joined and calls for actions to generate awareness of the inequalities between men and women and to highlight the responsibility men and boys have in achieving gender equality. Through this collaboration, we seek the addition of Latin-American boys and men to the campaign.

Magos Herrera: For me the “He For She” campaign represents what jazz is: inclusive, democratic, evolving and progressive; an idea of progress through which we seek the equality between women and men, free of violence, free of fear and free of discrimination.

The press conference was attended by Javier Limon, Magos Herrea and Eugenia Leon, all of whom expressed their compromises for the “He For She” campaign and gave examples of their efforts to eliminate any forms of discrimination and violence towards women and girls through new models of conduct which favour an equal and egalitarian world.

The collaboration between UN Women Mexico and Sony Music, as well as through musicians’ interests, achieved the creation of a music CD which attempts to reach more people through the language of music, as well as to underline the idea that gender equality does not affect only women, but rather that it is a necessity which affects us all, women and men, girls and boys. Further to the contribution of a culture of gender equality which concerts and the very CD create, a percentage of income from sales will be given to the campaign.

The campaign was released by Emma Watson, UN Women Goodwill Ambassador, during an extraordinary event at the United Nations Headquarters in New York in September of 2014. Since then, political figures, institutions, universities and enterprises have joined

UN Women, the United Nations’ Entity for Gender Equality and the Empowerment of Women, is the agency created by the United Nations for the defense of girls’ and women’s right across the world. UN Women advices and supports United Nations Member States in the compliance with international norms to achieve gender equality, and works with governments, parliaments, judicial powers and civil society towards the creation and implementation of laws and public policies for the implementation of said norms.

HeForShe is a solidarity movement in support of Gender Equality developed by UN Women, which invites men and boys to participate as advocates and agents of change in the achievement of gender equality and to make women’s and girls’ rights a reality.