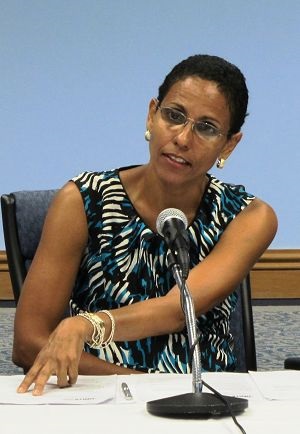 United Nations Development Fund for Women (UNIFEM - part of UN Women) Regional Programme Director (RPD), Ms. Roberta Clark
The Caribbean launch of the United Nations Secretary General's UNiTE to End Violence Against Women Campaign, next month, will be an opportunity for all the stakeholders in this effort to learn from each other's experiences and collectively move forward with best practices for ending violence against women and tackling violence across the region as a whole.

The Conference which has as its theme: "Strengthening Accountability and Changing Culture to End Violence against Women in the Caribbean" will be held on the 11th -12th October in Barbados. The meeting will be attended by Attorneys General, members of the judiciary, senior representatives of regional police forces as well as stakeholders from civil society organisations.

The event which is being coordinated by UN Resident Coordinators across the region with technical leadership from the United Nations Development Fund for Women (UNIFEM - part of UN Women) is intended to generate dialogue on the reforms which are needed to the administration of justice to ensure the prevention, protection ad punishment of violence against women.

UN Resident Coordinator for Barbados and the Eastern Caribbean, Ms. Michelle Gyles-McDonnough noted that they were particularly delighted to have the presence of  Caribbean nationals, the President of the International Tribunal for the former Yugoslavia, Judge Patrick Robinson - a Jamaican national having held the post of Deputy Solicitor-General as well as the President of the International Tribunal for Rwanda, Sir Dennis Byron - a native of Saint Kitts and Nevis - who held the post of Chief Justice of the Eastern Caribbean Supreme Court.

United Nations Development Fund for Women (UNIFEM - part of UN Women) Regional Programme Director (RPD) Ms. Roberta Clarke noted that their participation was significant given that the international criminal tribunals have been very much at the forefront of looking at sexual violence as an aspect of torture  and crimes against humanity.

"So one of the questions the Presidents will be addressing will be, what are the lessons that have been learnt at the international level, and how can those lessons be translated in strengthening the law response at the national domestic levels? Through their participation here at the conference we hope very much for their reflections on the relationship between ending violence against women, strengthening democracy, citizenship and human rights", Ms. Clarke added.

Ms. Clarke continued that it was particularly important that representatives of regional nongovernmental organisations were also a part of the conference since they can bring their understanding and experiences of working at the community level dealing with domestic violence and other forms of violence:

"We will be very much relying on the intelligence of service providers and community based organisations. We are expecting that the cross fertilization of those who have the actual experiences of providing services to victims as well as the perpetrators together with those who are charged with developing policy and law would give us a richer base from which we can get recommendations that would really take us forward."

Ms. Gyles-McDonnough stressed that it was very important too, to look at the social context since law reform and policies to address gender based violence must be related to the social context in which we work. The UN Resident Coordinator for Barbados and the Eastern Caribbean said given the rising incidences of crime and violence across the region and threats to citizen safety and security,  there is need to not only look at gender based violence,  but to tackle violence in its broader sense.