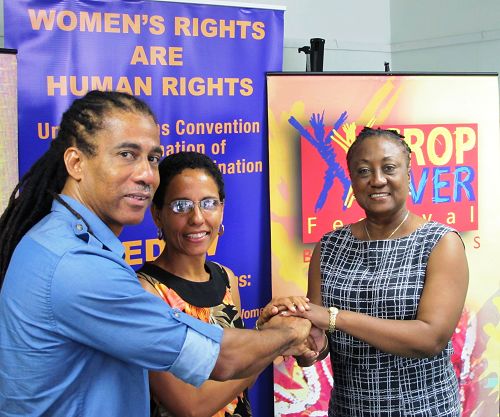 The regional Artistes' response to the UNiTE campaign took a significant step forward recently, with the United Nations system in Barbados forming a partnership with Barbados' leading cultural entity, the National Cultural Foundation (NCF) to raise awareness of and increase momentum towards ending violence against women and girls.

In April of this year, regional and local artistes gathered in Barbados for a workshop organised by UNIFEM with the support of UNIFEM Partner for Peace Aja.  This collaboration led to the production of public service announcements to carry one consistent message - zero tolerance to all forms of violence against women and the promotion of a culture of peace. In addition the artistes had agreed to use their presence on stage during the high participation and peak publicity of national festivals and carnivals across the region and the Caribbean Diaspora in London, Canada and the United States to inform their audiences about the UNiTE campaign.

The work done in the region is part of a wider UN Secretary-General led Campaign 'UNiTE to End Violence against Women, 2008-2015'. The Campaign was launched in 2008 with the overall objective of raising public awareness and increasing political will and resources for preventing and responding to violence against women and girls. Its Framework for Action identifies five key outcomes as benchmarks for the Campaign, to be achieved in all countries by 2015:

The Framework is intended to serve as the overall "umbrella" in a call to action at all levels for governments, the UN System, the private sector, the media and civil society to intensify action on ending violence against women and girls.

Regional Programme Director of the UNIFEM Caribbean Office, Roberta Clarke noted: "The UN agencies in Barbados are very pleased to take the campaign efforts to the national level in what we see as a very important strategic partnership with the National Cultural Foundation (NCF) through two of the nation's major cultural expositions - Crop Over and the National Independence Festival of Creative Arts (NIFCA) - through which we have the opportunity to promote a culture of peace and gender equality".

National Cultural Foundation Chief Executive Officer, Dr. Donna Hunte-Cox said the NCF was pleased to partner with the UN to mount the UNiTE campaign on two national platforms to promote a culture of peace not only in Barbados but also throughout the Caribbean.

The UN system is committed to working with a range of partners and has undertaken initiatives with faith-based leaders and institutions, as well as producers and artistes in the popular music traditions.

Events Producer with the NCF, Aja noted that the collaboration was another step in efforts to change the statistics where violence against women is concerned and violence in general in the Caribbean.  He explained that through the partnership with the NCF during Crop Over, the UN agencies will:

Aja added: "The partnership between the NCF and the UN system will therefore be visually impactful as well with the airing of public service announcements featuring local and regional artistes which speak to ending violence against women on the wide screens at all major events during Crop Over, including the flagship shows such as the Pic -O- de-Crop finals."